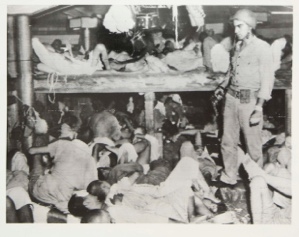 Commentary
These Japanese wounded, crowded like cattle by the Japanese in the hold of a Japanese hospital ship, are now being guarded by U.S. Marine PFC Frank Pisani, 21, of Boston, Massachusetts. The ship was seized when a routine inspection revealed guns and ammunition aboard. Ventilation in the hold was poor, and all sanitary facilities were lacking. The ship, carrying Red Cross signs and banners, was taken into custody by a U.S. warship and escorted to an Allied port.
Dimensions
Sheet: 7 x 8 13/16
Materials
Wire photographs were originally transmitted over phonelines, then later, by satellite. They were first used in the early 1920s. Associated Press became a leader with this. After pigment touch-ups, etc., the print is put into a drum (like a drum scanner). The image gets converted into audio tones that are transmitted. The tones are received and beamed onto photo-sensitive paper. Wire photographs are copies without originals---they are hybrid, transmitted objects. (Britt Salvesen, Curator and Department Head, Photography Department, Los Angeles County Museum of Art, March 30-31, 2022)
Keywords Click a term to view the records with the same keyword
This object has the following keywords:
Boston, Casualties, Frank Pisani, Hospital ships, Injury, Japan, Marines, Pacific Theater, Pvt. Frank Pisani, Suffering, United States Marine Corps, United States Marine Corps, World War II
Additional Images Click an image to view a larger version

Your current search criteria is: Keyword is "ENN" and [Object]Nationality is ".