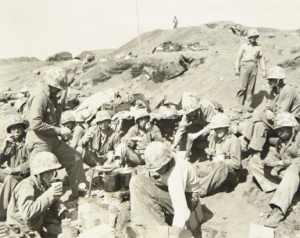 
Tired and grimy from their struggles on Iwo Jima beaches, these Marine Corps engineers takes a few minutes off for chow, March 1945
Vintage ferrotyped gelatin silver print on paper

Commentary
Tired and grimy from their struggles on the Iwo Jima beaches, this group of Marine Corps engineers takes a few minutes off for chow. This sector is relatively secure, but the enemy lies in wait over the volcanic ridges. Shortly after this picture was snapped, the men were on the go against the Japanese again, paving the way for their buddiesâ march to Tokyo, March 1945.
Technique
Ferrotyped prints are processed in such a way that they are shiny. The print has a sensitive surface, usually thinner, because it was put through a press while still wet.
Materials
Ferrotyped prints have a sensitive surface, usually shiny and thinner, because they are put through a press while still wet. Ferrotyping makes the surface of the photograph smoother. Light does not scatter as much on a smoother surface, so this increases contrast. That makes ferrotyped images better for press photography.
Keywords Click a term to view the records with the same keyword
This object has the following keywords:
Battle of Iwo Jima, Eating, Iwo Jima, Japan, Marines, Pacific Theater, U.S. Marine Corps Engineers, United States Marine Corps, World War II
Additional Images Click an image to view a larger version

Your current search criteria is: Keyword is "ENN" and [Object]Display Artist is "C. W. Rogerson".