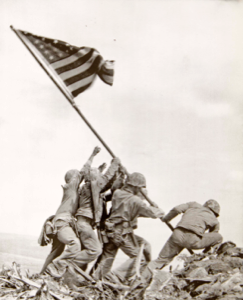 Commentary
Raising the Flag on Iwo Jima, February 23, 1945. NB: this particular print of Joe Rosenthalâs icon was issued by the Associated Press on the occasion of Iwo Jimaâs formal reversion to Japanese rule in 1968. The caption on the verso reads: âThe Stars and Stripes only in bronze today over Iwo Jima which was captured by U.S. Marines in one of the bitterest battles against Japan in 1945, and is due to revert to Japanese ruleâ¦. Historic scene photographed by Associated Press photographer Joe Rosenthal as U.S. Marines raise the American flag.â
Materials
Wire photographs were originally transmitted over phonelines, then later, by satellite. They were first used in the early 1920s. Associated Press became a leader with this. After pigment touch-ups, etc., the print is put into a drum (like a drum scanner). The image gets converted into audio tones that are transmitted. The tones are received and beamed onto photo-sensitive paper. Wire photographs are copies without originals---they are hybrid, transmitted objects. (Britt Salvesen, Curator and Department Head, Photography Department, Los Angeles County Museum of Art, March 30-31, 2022)
Keywords Click a term to view the records with the same keyword
This object has the following keywords:
Associated Press, Battle of Iwo Jima, Iwo Jima, Japan, Marines, Mount Suribachi, Old Glory, Pacific Theater, Pulitzer Prize, United States Marine Corps, United States Marine Corps, World War II
Additional Images Click an image to view a larger version

Your current search criteria is: Keyword is "ENN" and [Object]Display Artist is "Joe Rosenthal".