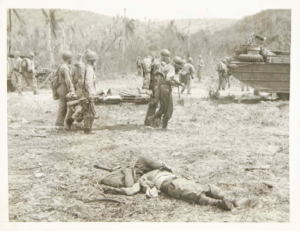 Commentary
American troops carry a litter loaded with supplies past a dead Japanese near Asan Point on Guam, shortly after the invasion for underway. This Japanese is just one of 7,419 enemy dead who have been buried by the Marines as they drove towards the northern tip of the island, August 1944.
Technique
Ferrotyped prints are processed in such a way that they are shiny. The print has a sensitive surface, usually thinner, because it was put through a press while still wet.
Materials
Ferrotyped prints have a sensitive surface, usually shiny and thinner, because they are put through a press while still wet. Ferrotyping makes the surface of the photograph smoother. Light does not scatter as much on a smoother surface, so this increases contrast. That makes ferrotyped images better for press photography.
Keywords Click a term to view the records with the same keyword
This object has the following keywords:
Asan Point, Casualties, Corpses, Japan, Killed in action, Marines, Pacific Theater, Stretchers, Supplies, United States, United States Marine Corps, United States Marine Corps, World War II
Additional Images Click an image to view a larger version

Your current search criteria is: Keyword is "ENN" and [Object]Display Artist is "Paige Abbott".