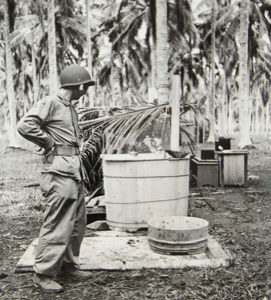 
A Leatherneck looks over a Japanese officersâ bathtub on Guadalcanal Island, left behind when Japanese forces left in the face of a Marine assault, August 1942
Vintage ferrotyped gelatin silver print on paper

Commentary
âModern Conveniencesâ on Guadalcanal Island, Solomon Islands: The Japanese, who occupied the Solomon Islands until the U.S. Marines unceremoniously chased them out of a half-dozen of them in the start of the first U.S. offensive of the war, brought all the comforts of home with them. Here, a Leatherneck looks over a Japanese officersâ bathtub on Guadalcanal Island. The tub was left behind when the Japanese forces left in a hurry in the face of the Marinesâ assault on the island, August 1942.
Technique
Ferrotyped prints are processed in such a way that they are shiny. The print has a sensitive surface, usually thinner, because it was put through a press while still wet.
Materials
Ferrotyped prints have a sensitive surface, usually shiny and thinner, because they are put through a press while still wet. Ferrotyping makes the surface of the photograph smoother. Light does not scatter as much on a smoother surface, so this increases contrast. That makes ferrotyped images better for press photography.
Keywords Click a term to view the records with the same keyword
This object has the following keywords:
Bathtubs, Guadalcanal, Japan, Marines, Officers, Pacific Theater, United States Marine Corps, United States Marine Corps, World War II
Additional Images Click an image to view a larger version

Your current search criteria is: Keyword is "ENN" and [Object]Display Artist is "Sherman Montrose".