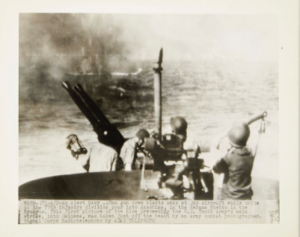 Commentary
An alert Navy 40mm gun crew blasts away at Japanese aircraft while units of the 77th Infantry Division put into Akashima, in the Kerma Rhetto in the Ryukyus. This first picture of the blow preceding the U.S. Tenth Armyâs main strike into Okinawa was taken just off the beach by an Army combat photographer. Signal Corps Radio telephoto, April 2, 1945.

The Battle of Okinawa (Hepburn: Okinawa-sen) (romanized: Uchinaa ikusa), codenamed Operation Iceberg, was a major battle of the Pacific War fought on the island of Okinawa by United States Marine and Army forces against the Imperial Japanese Army. The initial invasion of Okinawa on April 1, 1945 was the largest amphibious assault in the Pacific Theater of World War II. The 82-day battle lasted from April 1 until June 22, 1945. After a long campaign of island hopping, the Allies were planning to use Kadena Air Base on the large island of Okinawa as a base for Operation Downfall, the planned invasion of the Japanese home islands, 340 mi (550 km) away. The United States created the Tenth Army, a cross-branch force consisting of the 7th, 27th, 77th, and 96th Infantry Divisions of the US Army with the 1st, 2nd, and 6th Divisions of the Marine Corps, to fight on the island. The Tenth was unique in that it had its own tactical air force (joint Army-Marine command), and it was also supported by combined naval and amphibious forces. The battle has been referred to as the "typhoon of steel" in English, and tetsu no ame ("rain of steel") or tetsu no bÅfÅ« ("violent wind of steel") in Japanese. The nicknames refer to the ferocity of the fighting, the intensity of Japanese kamikaze attacks, and the sheer numbers of Allied ships and armored vehicles that assaulted the island. The battle was one of the bloodiest in the Pacific, with approximately 160,000 casualties on both sides: at least 75,000 Allied and 84,166â117,000 Japanese, including drafted Okinawans wearing Japanese uniforms. 149,425 Okinawans were killed, committed suicide or went missing, a significant proportion of the estimated pre-war local population of 300,000. In the naval operations surrounding the battle, both sides lost considerable numbers of ships and aircraft, including the Japanese battleship Yamato. After the battle, Okinawa provided a fleet anchorage, troop staging areas, and airfields in proximity to Japan in preparation for a planned Allied invasion.
Dimensions
Sheet: 7 x 8 7/8
Materials
Wire photographs were originally transmitted over phonelines, then later, by satellite. They were first used in the early 1920s. Associated Press became a leader with this. After pigment touch-ups, etc., the print is put into a drum (like a drum scanner). The image gets converted into audio tones that are transmitted. The tones are received and beamed onto photo-sensitive paper. Wire photographs are copies without originals---they are hybrid, transmitted objects. (Britt Salvesen, Curator and Department Head, Photography Department, Los Angeles County Museum of Art, March 30-31, 2022)
Keywords Click a term to view the records with the same keyword
This object has the following keywords:
Aka Shima, Antiaircraft Guns, Battle of Okinawa, Combat photographers, Imperial Japanese Army Air Force, Invasion of Japan, Japanese Army, Okinawa, Pacific Theater, U.S. 77th Infantry, U.S. Tenth Army, United States Marine Corps, United States Navy, United States Navy, World War II
Additional Images Click an image to view a larger version