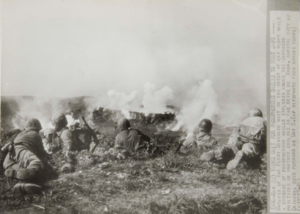 Commentary
Yanks wait for phosphorous shells to rout Japanese: First Division Marines wait on the crest of one slope while a barrage of phosphorous shells explodes among the Japanese positions on another incline, as the drive on Okinawa's capital city Naha goes forward, May 8, 1945.

The Battle of Iwo Jima (19 February â 26 March 1945) was a major battle in which the U.S. Marine Corps landed on and eventually captured the island of Iwo Jima from the Imperial Japanese Army (IJA) during World War II. The American invasion, designated Operation Detachment, had the goal of capturing the entire island, including the three Japanese-controlled airfields (including the South Field and the Central Field), to provide a staging area for attacks on the Japanese main islands. This five-week battle comprised some of the fiercest and bloodiest fighting of the Pacific War of World War II. After the heavy losses incurred in the battle, the strategic value of the island became controversial. It was useless to the U.S. Army as a staging base and useless to the U.S. Navy as a fleet base. However, Navy Seabees rebuilt the landing strips, which were used as emergency landing strips for USAAF B-29s. The Japanese positions on the island were heavily fortified, with a dense network of bunkers, hidden artillery positions, and 11 miles (18 kilometers) of underground tunnels. The American ground forces were supported by extensive Naval artillery, and they had complete air supremacy provided by U.S. Navy and Marine Corps aviators throughout the entire battle. Japanese combat deaths numbered three times the number of American deaths, although - uniquely among Pacific War Marine battles - American total casualties (dead and wounded) exceeded those of the Japanese. Of the 21,000 Japanese soldiers on Iwo Jima at the beginning of the battle, only 216 were taken prisoner. Some of them were captured because they had been knocked unconscious or otherwise disabled. The majority of the remainder were killed in action, although it has been estimated that as many as 3,000 continued to resist within the various cave systems for many days afterwards, eventually succumbing to their injuries or surrendering weeks later. Despite the bloody fighting and severe casualties on both sides, the American victory was assured from the start. Overwhelming American superiority in numbers and arms as well as complete air supremacyâcoupled with the impossibility of Japanese retreat or reinforcement, along with sparse food and suppliesâpermitted no plausible circumstance in which the Americans could have lost the battle. Joe Rosenthal's Associated Press photograph of the raising of the U.S. flag on top of 554-foot (169 meter) Mount Suribachi by six U.S. Marines became an iconic image of the battle and the American war effort in the Pacific.
Dimensions
Sheet: 8 1/16 x 10 5/8
Materials
Wire photographs were originally transmitted over phonelines, then later, by satellite. They were first used in the early 1920s. Associated Press became a leader with this. After pigment touch-ups, etc., the print is put into a drum (like a drum scanner). The image gets converted into audio tones that are transmitted. The tones are received and beamed onto photo-sensitive paper. Wire photographs are copies without originals---they are hybrid, transmitted objects. (Britt Salvesen, Curator and Department Head, Photography Department, Los Angeles County Museum of Art, March 30-31, 2022)
Keywords Click a term to view the records with the same keyword
This object has the following keywords:
Battle of Iwo Jima, Battle of Okinawa, Bombardments, Imperial Japanese Army, Invasion of Japan, Japanese Army, Marines, Naha, Pacific Theater, U.S. First Marine Division, United States Marine Corps, World War II
Additional Images Click an image to view a larger version