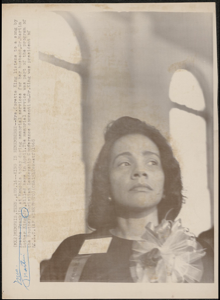 Commentary
King Is Remembered: Mrs. Coretta King listens to a song by Aretha Franklin during Memorial Services in Memphis for her husband, Dr. Martin Luther King, Jr. He was killed in Memphis in April. The Memorial Service was part of the program of The Southern Christian Leadership Conference convention.

Your current search criteria is: Keyword is "ETX" and [Object]Display Artist is "Charles Kelly".