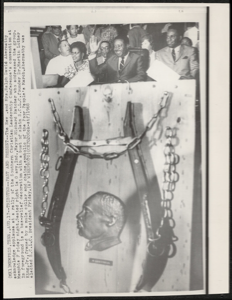 Commentary
Tributes -- Past and Present: Reverend and Mrs. Ralph David Abernathy acknowledge applause at a rally of the Southern Christian Leadership Conference's convention in Memphis Friday night. Seated at right is Gary, Indiana Mayor Richard Hatcher, who addressed the group. In the foreground is a bas-relief decoration with a bust of slain SCLC founder Dr. Martin Luther King, Jr. It is framed by a mule collar and chains, symbolic of the Poor People's March. Abernathy was elected SCLC President on Friday, Memphis, Tennessee.

As a foot soldier in the Civil Rights Movement, Juanita Abernathy participated in all of the pivotal protests of the era. She helped rally the black community in Montgomery, Alabama as her husband Rev. Ralph David Abernathy and Martin Luther King, Jr. led the Montgomery Bus Boycott (1955-1956). She remained fearless in the face of relentless death threats meant to stop her and her husband's activism. In January 1957 while her husband and King traveled to Atlanta to establish the Southern Christian Leadership Conference (SCLC), Juanita Abernathy and her infant daughter miraculously survived the bombing of their home by white supremacists. Abernathy continued her activism when she and her family moved to Atlanta in 1961. She worked to spur school desegregation in the city by enrolling her children in independent white schools. She accompanied her husband to the 1963 March on Washington and walked with him on the frontlines of the Selma to Montgomery March in 1965. In 1966, Abernathy and her husband, along with Martin Luther King, Jr. and his wife Coretta, resided in a Chicago slum to protest housing conditions for blacks in what was then the most racially segregated large city in America. In recent years, Abernathy has traveled around the world speaking about her late husband's leadership role and her own experiences in the struggle, and urging others to continue the fight for justice and equality.
Marks
On recto: typewritten title and date.
On verso: manuscript title, date stamp and library stamp.
Materials
Wire photographs were originally transmitted over phonelines, then later, by satellite. They were first used in the early 1920s. Associated Press became a leader with this. After pigment touch-ups, etc., the print is put into a drum (like a drum scanner). The image gets converted into audio tones that are transmitted. The tones are received and beamed onto photo-sensitive paper. Wire photographs are copies without originals---they are hybrid, transmitted objects. (Britt Salvesen, Curator and Department Head, Photography Department, Los Angeles County Museum of Art, March 30-31, 2022)
Keywords Click a term to view the records with the same keyword
This object has the following keywords:
Civil Rights Movements, Injustice, Juanita Abernathy, Martin Luther King, Jr., Martin Luther King, Jr., Poor People's Campaign, Poor People's Campaign, Racial Discrimination, Rallies, Reverend Ralph Abernathy, Reverend Ralph Abernathy, Richard Hatcher, Southern Christian Leadership Conference, Southern Christian Leadership Conference Convention, Statues, Tributes
Additional Images Click an image to view a larger version

Your current search criteria is: Keyword is "ETX" and [Object]Display Artist is "Charles Kelly".