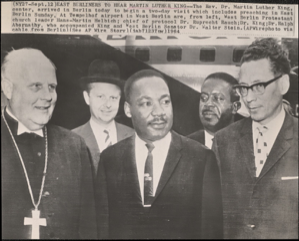 Martin Luther King, Jr. (1929-1968) was an American Baptist minister and activist who became the most visible spokesperson and leader in the Civil Rights Movement from 1954 until his assassination in 1968.

Your current search criteria is: Keyword is "ETX" and [Object]Display Artist is "Edwin Reichert".