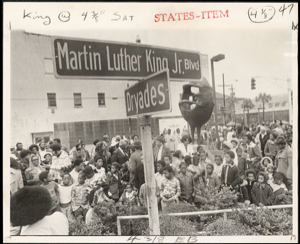 Commentary
Melpomene Renamed: "Help us go forth and make a reality the things Martin Luther King, Jr. stood for." Councilman A. L. Davis said this to a crowd of about 200 yesterday at the dedication of a street renamed after the slain Civil Rights leader. Melpomene street between Dryades and South Gayoso is now Martin Luther King, Jr. Boulevard, New Orleans.

Martin Luther King, Jr. (1929-1968) was an American Baptist minister and activist who became the most visible spokesperson and leader in the Civil Rights Movement from 1954 until his assassination in 1968.
Marks
On verso: artist's credit stamp, date stamp and newspaper caption affixed.
Materials
Ferrotyped prints have a sensitive surface, usually shiny and thinner, because they are put through a press while still wet. Ferrotyping makes the surface of the photograph smoother. Light does not scatter as much on a smoother surface, so this increases contrast. That makes ferrotyped images better for press photography.
Keywords Click a term to view the records with the same keyword
This object has the following keywords:
A. L. Davis, A. L. Davis, Civil Rights Movements, Crowds, Injustice, Martin Luther King, Jr., New Orleans, Racial Discrimination, Southern Christian Leadership Conference, Speeches, Street naming, Street Scenes
Additional Images Click an image to view a larger version

Your current search criteria is: Keyword is "ETX" and [Object]Display Artist is "J. W. Guillot".