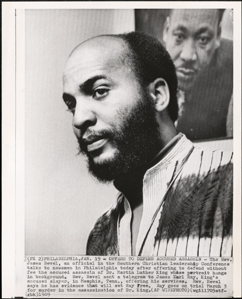 Commentary
Offers to Defend Accused Assassin: Reverend James Bevel, an official in the Southern Christian Leadership Conference, talks to newsmen in Philadelphia today after offering to defend the accused assassin of Dr. Martin Luther King, Jr. for free. Reverend Bevel sent a telegram to James Earl Ray, King's accused slayer, in Memphis, Tennessee, offering his services. Reverend Bevel says he has evidence that will set Ray free. Ray goes on trial March 3 for murder in the assassination of Dr. King.

James Luther Bevel (1936-2008) was a minister and a leader of the Civil Rights Movement in the United States. As the Director of Direct Action and of Nonviolent Education of the Southern Christian Leadership Conference (SCLC), he initiated, developed and directed SCLC's three major successes of the era: the 1963 Birmingham Children's Crusade; the 1965 Selma Voting Rights Movement; and the 1966 Chicago Open Housing Movement. Bevel suggested that SCLC call for and join a March on Washington in 1963. Bevel strategized the 1965 Selma to Montgomery marches, which contributed to Congressional passage of the 1965 Voting Rights Act. Prior to his time with SCLC, Bevel worked in the Nashville Student Movement, which conducted the 1960 Nashville Lunch-Counter Sit-Ins and the 1961 Open Theater Movement, and recruited students to continue the 1961 Freedom Rides after they were attacked. He initiated and directed some of the 1961 and 1962 Voting Rights Movement activities in Mississippi. In 1967, Bevel was Chair of the Spring Mobilization Committee to End the War in Vietnam. He initiated the 1967 March on the United Nations as part of the Anti-war Movement. His last major action was as coinitiator of the 1995 Day of Atonement / Million Man March in Washington, DC. For his work, Bevel has been called a Father of Voting Rights, the strategist and architect of the 1960s Civil Rights Movement, and half of the first-tier team that formulated many of the strategies and actions to gain federal legislation and social changes during the 1960s Civil Rights Era.
Marks
On recto: typewritten title and date.
On verso: typewritten title and date stamp.
Materials
Wire photographs were originally transmitted over phonelines, then later, by satellite. They were first used in the early 1920s. Associated Press became a leader with this. After pigment touch-ups, etc., the print is put into a drum (like a drum scanner). The image gets converted into audio tones that are transmitted. The tones are received and beamed onto photo-sensitive paper. Wire photographs are copies without originals---they are hybrid, transmitted objects. (Britt Salvesen, Curator and Department Head, Photography Department, Los Angeles County Museum of Art, March 30-31, 2022)
Keywords Click a term to view the records with the same keyword
This object has the following keywords:
Assassinations, Civil Rights Movements, Injustice, James Earl Ray, Male Portraits, Martin Luther King, Jr., Philadelphia, Press Conferences, Racial Discrimination, Reverend James Bevel, Southern Christian Leadership Conference, Trials
Additional Images Click an image to view a larger version

Your current search criteria is: Keyword is "ETX" and [Object]Display Artist is "Rusty Kennedy".