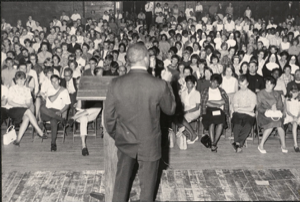 Commentary
St. Thomas' Gym in St. Paul, Minnesota filled with young Civil Rights workers as John Lewis addresses a Brotherhood Button orientation rally. Some 900 Twin Cities teenagers gave the 25-year-old chairman of the Student Non-Violent Co-coordinating Committee (SNCC) a standing ovation in the St. Thomas College armory. Then the youngsters set out to sell Brotherhood Buttons to raise money for his and other human rights programs. Lewis told the crowd he would return to Americus, Georgia with new hope, dedication and faith inspired by the support of young people in Minnesota.

John Lewis (1940-2020) was an American politician and Civil Rights leader. As chairman of the Student Nonviolent Coordinating Committee (SNCC), he was one of the "Big Six" leaders of groups who organized the 1963 March on Washington. He played many key roles in the Civil Rights Movement and its actions to end legalized racial segregation in the United States. He was a member of the Democratic Party leadership in the U.S. House of Representatives and served as a Chief Deputy Whip starting in 1991 and Senior Chief Deputy Whip starting in 2003. The Selma to Montgomery Marches were three protest marches held in 1965 along the 54-mile (87 km) highway from Selma, Alabama to the state capital of Montgomery. The marches were organized by nonviolent activists to demonstrate the desire of black citizens to exercise their constitutional right to vote, in defiance of segregationist repression. They were part of a broader voting rights movement underway in Selma and throughout the American South. By highlighting racial injustice, the marches contributed to passage that year of the Voting Rights Act, a landmark federal achievement of the Civil Rights Movement.
Marks
On verso: manuscript title and typewritten label with artist's credit, title, manuscript title, date and newspaper caption affixed.
Materials
Ferrotyped prints have a sensitive surface, usually shiny and thinner, because they are put through a press while still wet. Ferrotyping makes the surface of the photograph smoother. Light does not scatter as much on a smoother surface, so this increases contrast. That makes ferrotyped images better for press photography.
Keywords Click a term to view the records with the same keyword
This object has the following keywords:
Activists, Audiences, Civil Rights Movements, Fundraisers, Gymnasiums, Injustice, John Lewis, Racial Discrimination, Rallies, Speeches, St. Paul, St. Thomas College, Student Nonviolent Coordinating Committee
Additional Images Click an image to view a larger version