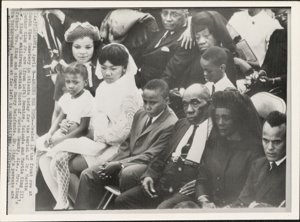 Commentary
Around the Tomb: seated in the front row at South View Cemetery in Atlanta for the burial of Dr. Martin Luther King, Jr. are (from left) Bernice, Yolanda and Martin Luther King III, Dr. King's children; Obadiah Scott of Marion County, Alabama, Mrs. King's father; Mrs. King and singer Harry Belafonte. Dr. King's parents are in the background. The woman at far left is unidentified.

Martin Luther King III (b. 1957) is an American human rights advocate and community activist. He is the oldest son and oldest living child of Civil Rights leaders Martin Luther King, Jr. and Coretta Scott King. In 1997, King was unanimously elected to head the Southern Christian Leadership Conference (SCLC), a Civil Rights organization his father founded. Under King's leadership, the SCLC held hearings on police brutality and launched a successful campaign to change the Georgia state flag, which previously featured a large Confederate cross.

Yolanda Denise King (1955-2007) was an American activist and first-born child of Civil Rights leaders Reverend Martin Luther King, Jr. and Coretta Scott King. She was also known for her artistic and entertainment endeavors and public speaking. Her childhood experience was greatly influenced by her father's highly public and influential activism. Bernice Albertine King (b. 1963) is an American minister and the youngest child of Civil Rights leaders Martin Luther King, Jr. and Coretta Scott King. She was five years old when her father was assassinated. In her adolescence, King chose to work towards becoming a minister after having a breakdown from watching a documentary about her father. King was 17 when she was invited to speak at the United Nations. Twenty years after her father was assassinated, she preached her trial sermon. Inspired by her parents' activism, she was arrested multiple times during her early adulthood. King was elected president of the Southern Christian Leadership Conference in 2009. Her older brother Martin III and her father had previously held the position. She was the first woman in the organization's history elected to the presidency, amidst the SCLC holding two separate conventions. King became upset with the actions of the SCLC, amid feeling that the organization was ignoring her suggestions; she declined the presidency in January 2010. King became CEO of the King Center only months afterward. King's primary focus as CEO of The King Center and in life is to ensure that her father's nonviolent philosophy and methodology (which The King Center calls Nonviolence 365) is integrated in various sects of society, including education, government, business, media, arts, entertainment and sports. King believes that Nonviolence 365 is the answer to society's problems and promotes it being embraced as a way of life. King is also the CEO of First Kingdom Management, a Christian consulting firm based in Atlanta, Georgia.

Harry Belafonte (1927) is an American singer, songwriter, activist, and actor. One of the most successful Jamaican-American pop stars in history, he was dubbed the "King of Calypso" for popularizing the Caribbean musical style (originating in Trinidad & Tobago) with an international audience in the 1950s. His breakthrough album Calypso (1956) is the first million-selling LP by a single artist. Belafonte is perhaps best known for singing "The Banana Boat Song", with its signature lyric "Day-O". He has recorded in many genres, including blues, folk, gospel, show tunes, and American standards. He has also starred in several films, most notably in Otto Preminger's hit musical Carmen Jones (1954), Island in the Sun (1957), and Robert Wise's Odds Against Tomorrow (1959). Belafonte was an early supporter of the Civil Rights Movement in the 1950s and 1960s, and one of Martin Luther King, Jr.'s confidants. Throughout his career, he has been an advocate for political and humanitarian causes, such as the Anti-Apartheid Movement and USA for Africa. Since 1987, he has been a UNICEF Goodwill Ambassador. In recent years, he has been a vocal critic of the policies of the George W. Bush presidential administrations. Harry Belafonte now acts as the American Civil Liberties Union celebrity ambassador for juvenile justice issues. Belafonte has won three Grammy Awards, including a Lifetime Achievement Award, an Emmy Award, and a Tony Award. In 1989, he received the Kennedy Center Honors. He was awarded the National Medal of Arts in 1994. In 2014, he received the Jean Hersholt Humanitarian Award at the Academy's 6th Annual Governors Awards. In March 2014, he was awarded an honorary doctorate from Berklee College of Music in Boston.
Marks
On recto: typewritten title and date.
On verso: manuscript title, date and newspaper stamp.
Materials
Wire photographs were originally transmitted over phonelines, then later, by satellite. They were first used in the early 1920s. Associated Press became a leader with this. After pigment touch-ups, etc., the print is put into a drum (like a drum scanner). The image gets converted into audio tones that are transmitted. The tones are received and beamed onto photo-sensitive paper. Wire photographs are copies without originals---they are hybrid, transmitted objects. (Britt Salvesen, Curator and Department Head, Photography Department, Los Angeles County Museum of Art, March 30-31, 2022)
Keywords Click a term to view the records with the same keyword
This object has the following keywords:
Assassins, Atlanta, Bernice King, Civil Rights Movements, Death, Funerals, Harry Belafonte, Harry Belafonte, Injustice, Loss, Martin Luther King Family, Martin Luther King III, Martin Luther King, Jr., Mourners, Mourning, Obadiah Scott, Racial Discrimination, Southern Christian Leadership Conference, Southview Cemetery, Yolanda King
Additional Images Click an image to view a larger version