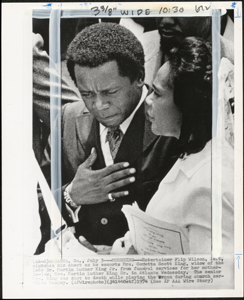 Cleora "Flip" Wilson, Jr. (December 8, 1933 â November 25, 1998) was an American comedian and actor best known for his television appearances during the late 1960s and 1970s. From 1970 to 1974, Wilson hosted his own weekly variety series, The Flip Wilson Show, and introduced viewers to his recurring character Geraldine. The series earned Wilson a Golden Globe and two Emmy Awards. At one point it was the second highest rated show on network television. Wilson was the first black person to host a successful variety TV show. (Sammy Davis Jr. had had a short-lived variety show in 1966.) In January 1972, Time magazine featured Wilson's image on its cover and named him "TV's first black superstar". Wilson released a number of comedy albums in the 1960s and 1970s, and won a Grammy Award for his 1970 album "The Devil Made Me Buy This Dress". After The Flip Wilson Show ended, Wilson kept performing and acting until the 1990s, though at a reduced schedule. He hosted a short-lived revival of People are Funny in 1984, and had the lead role in the 1985-1986 sitcom Charlie & Co.
Marks
On recto: typewritten title and date.
On verso: typewritten title and date stamp.
Materials
Wire photographs were originally transmitted over phonelines, then later, by satellite. They were first used in the early 1920s. Associated Press became a leader with this. After pigment touch-ups, etc., the print is put into a drum (like a drum scanner). The image gets converted into audio tones that are transmitted. The tones are received and beamed onto photo-sensitive paper. Wire photographs are copies without originals---they are hybrid, transmitted objects. (Britt Salvesen, Curator and Department Head, Photography Department, Los Angeles County Museum of Art, March 30-31, 2022)
Keywords Click a term to view the records with the same keyword
This object has the following keywords:
Alberta Williams King, Assassinations, Atlanta, Civil Rights Movements, Coretta Scott King, Coretta Scott King, Death, Flip Wilson, Flip Wilson, Funerals, Hate, Hate crimes, Injustice, Loss, Martin Luther King Family, Martin Luther King, Jr., Mourners, Mourning, Racial Discrimination, Widows
Additional Images Click an image to view a larger version