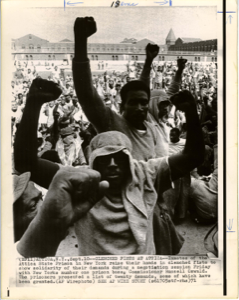 Commentary
Clenched Fists at Attica: Inmates of the Attica State Prison raise clenched fists to show solidarity over their demands during a negotiation session Friday with New York's number one prison boss, Commissioner Russell Oswald. The prisoners presented a list of twenty demands, some of which have been granted. Although amnesty was the stumbling block that derailed negotiations during the uprising 25 years ago (resulting in 43 deaths), nearly everyone got amnesty. The legal battle spawned by the Attica Riot continues today. Almost no one has been held responsible for their part in the tragedy.

Russell Oswald (1908-1990) was the chief of New York State's penal system at the time of the 1971 Attica Uprising. On his orders and with the Governor's approval, more than 1,000 heavily-armed officers stormed the prison amid a torrent of gunfire and tear gas. Oswald earned wide praise for humanitarianism and expertise in criminal rehabilitation. Governor Rockefeller appointed him to the New York State Board of Parole in 1957 and as the state's Commissioner of Correctional Services in December 1970.
Provenance
Donated to the Benton Museum of Art at Pomona College by Michael Mattis and Judy Hochberg on June 2, 2021.
Bibliography
Associated Press ID # 522337757630. Tom Wicker, A Time to Die: The Attica Prison Revolt, illustrated on cover.
Marks
On recto: typewritten label below image: "(BF11) ATTICA, N.Y., Sept. 10--CLENCHED FISTS AT ATTICA--Inmates of the / Attica State Prison in New York raise their hands in clenched fists to / show solidarity of their demands during a negotiation session Friday / with New Yorks [sic] number one prison boss, Commissioner Russell Oswald. / The prisoners presented a list of twenty demands, some of which have been granted. (AP wirephoto) SEE AP WIRE STORY (s61705stf-rhs)71".

On verso: Stamped near center in blue ink: "JUL 13 1978 [with an oval around it]". Handwritten in red in across the top edge and again in the bottom corner of the left edge: "Prisons + Prisoners - U.S." Handwritten in graphite in top right corner: "ATC-029 2500". Handwritten in red ink near center: "9-21-12". There are a few additional numbers handwritten in graphite or blue ink near center and in the bottom right corner.
Dimensions
Sheet: 10 1/4 x 8 1/8
Materials
Wire photographs were originally transmitted over phonelines, then later, by satellite. They were first used in the early 1920s. Associated Press became a leader with this. After pigment touch-ups, etc., the print is put into a drum (like a drum scanner). The image gets converted into audio tones that are transmitted. The tones are received and beamed onto photo-sensitive paper. Wire photographs are copies without originals---they are hybrid, transmitted objects. (Britt Salvesen, Curator and Department Head, Photography Department, Los Angeles County Museum of Art, March 30-31, 2022)
Keywords Click a term to view the records with the same keyword
This object has the following keywords:
Attica Prison, Attica Prison Riot, Civil Rights Movements, Discrimination, Injustice, Mediators, New York, Prisoners, Russell Oswald
Additional Images Click an image to view a larger version