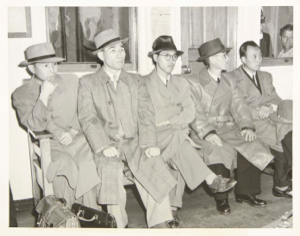 After arrival in New York aboard the transport West Point, members of the Japanese Embassy in Berlin transferred to this cutter, which brought them ashore for internment, July 11, 1945
Vintage wire photograph on paper
6 7/16 x 8 1/4 in. (16.35 x 20.96 cm)

Commentary
Japanese Internees Arrive Aboard West Point, New York: After their arrival in New York today (July 11) aboard the Navy transport West Point, members of the Japanese Embassy in Berlin were transferred to this cutter, which brought them ashore for internment. Their destinations were not disclosed. As the Japanese were taken from the transport, various derisive comments floated down to them from the 7,607 American troops who had shared the voyage with them from Europe. One Yank watching the Japanese debark said to reporters, âWhat do you want to pay any attention to them for? Weâre much nicer.â July 11, 1945.
Dimensions
Sheet: 7 x 8 7/8
Materials
Wire photographs were originally transmitted over phonelines, then later, by satellite. They were first used in the early 1920s. Associated Press became a leader with this. After pigment touch-ups, etc., the print is put into a drum (like a drum scanner). The image gets converted into audio tones that are transmitted. The tones are received and beamed onto photo-sensitive paper. Wire photographs are copies without originals---they are hybrid, transmitted objects. (Britt Salvesen, Curator and Department Head, Photography Department, Los Angeles County Museum of Art, March 30-31, 2022)
Keywords Click a term to view the records with the same keyword
This object has the following keywords:
Internment, Japan, Japanese Embassy Berlin, Pacific Theater, Prisoners, United States, USS West Point, West Point, World War II
Additional Images Click an image to view a larger version