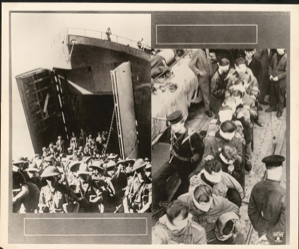 
At left, Australian troops pour out of a landing craft onto the beach northwest of Lae, New Guinea. At right, blind-folded German U-boat survivors march on the deck of an English destroyer., April 22, 1943
Vintage ferrotyped gelatin silver print on paper

Provenance
Purchased by the Benton Museum of Art at Pomona College on August 12, 2020 from Edwynn Houk Gallery, New York.
Commentary
From Two Different War Fronts: At left, Australian troops pour out of the gaping mouth of a landing craft onto the beach northwest of Lae, the former big Japanese base on New Guinea. At right, blind-folded German U-boat survivors on the deck of an English destroyer march with hands on the shoulders of the man ahead. These men were taken to prisoner-of-war camps in Allied areas.

Australian and U.S. forces sought to capture two major Japanese bases, one in the town of Lae, and another at Salamaua. After an amphibious landing at Nassau Bay, the Australians were reinforced by a U.S. regimental combat team in January of 1943. Allies kept up the pressure on the Japanese around Salamaua. In early September they launched an airborne assault on Nadzab and a seaborne landing near Lae, subsequently taking the town with simultaneous drives from the east and north-west. As the situation around Lae grew more desperate, the Salamaua garrison withdrew. It was captured on September 11, 1943. Lae fell shortly afterwards on September 16, bringing the campaign to an end.
Technique
Ferrotyped prints are processed in such a way that they are shiny. The print has a sensitive surface, usually thinner, because it was put through a press while still wet.
Marks
On recto: Label in bottom right corner, "DISPATCH / PHOTO NEWS / SERVICE / INC. / NEW YORK".

On verso: Typewritten label attached in center, "FROM TWO DIFFERENT WAR FRONTS / Left- From the gaping mouth of a landing craft, Australian troops pour onto the beach / northwest of Lae, the former big Jap base on New Guinea. Right - German U-boat sur- / vivors march along the deck of an English destroyer, blind-folded with hands on the / front man's shoulders. These men were taken to prisoner-of-war camps in Allied areas. / Produced Exclusively by Dispatch Photo News Service, New York City". Handwritten in graphite in top left corner, "DP-WW2-010".
Materials
Ferrotyped prints have a sensitive surface, usually shiny and thinner, because they are put through a press while still wet. Ferrotyping makes the surface of the photograph smoother. Light does not scatter as much on a smoother surface, so this increases contrast. That makes ferrotyped images better for press photography.
Keywords Click a term to view the records with the same keyword
This object has the following keywords:
Australia, Beach Scenes, Destroyers, Great Britain, Invasions, Invasions, Japan, Kriegsmarine, Lae, Landing craft, Prisoner-of-war camps, Prisoners, Salamaua, Salamaua Lae Campaign, Sea Rescues, Sinking ships, U-boats, World War II
Additional Images Click an image to view a larger version