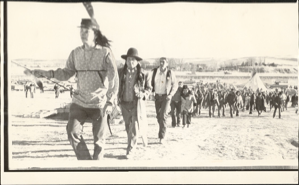 Commentary
Led by a ceremonial chief, Oglala Sioux tribe members at Wounded Knee, South Dakota march to the cemetery. Ancestors who were slain in the December 28th, 1890 massacre are buried there. After government forces withdrew from the village outskirts on Saturday, the Indians began to celebrate what they termed a victory. Carter Camp (third from left) is one of the American Indian Movement leaders who helped seize the village over a week ago. A federal grand jury convenes Monday to look into violations committed during the takeover.

The Wounded Knee Incident began on February 27, 1973, when 200 Oglala Lakota in the American Indian Movement (AIM) seized the town of Wounded Knee, South Dakota. The seizure was a protest against the corrupt and autocratic leadership of the reservation. The 71-day occupation captivated the nation and galvanized Indian youth.
Marks
On verso: manuscript title and newspaper caption with date stamp affixed.
Materials
Wire photographs were originally transmitted over phonelines, then later, by satellite. They were first used in the early 1920s. Associated Press became a leader with this. After pigment touch-ups, etc., the print is put into a drum (like a drum scanner). The image gets converted into audio tones that are transmitted. The tones are received and beamed onto photo-sensitive paper. Wire photographs are copies without originals---they are hybrid, transmitted objects. (Britt Salvesen, Curator and Department Head, Photography Department, Los Angeles County Museum of Art, March 30-31, 2022)
Keywords Click a term to view the records with the same keyword
This object has the following keywords:
American Indian Movement, Carter Camp, Celebrations, Cemeteries, Chiefs, Civil Rights Movements, Injustice, Native American sovereignty, Oglala, Pine Ridge Reservation, Racial Discrimination, Victory, Wounded Knee, Wounded Knee Indian Occupation
Additional Images Click an image to view a larger version

Your current search criteria is: Keyword is "FDN".