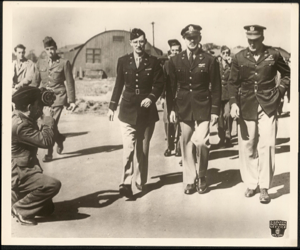 
Captain Clark Gable, one of America's most popular film stars, faces the portable camera of an Allied soldier as he walks to his quarters with fellow officers, 1943
Vintage ferrotyped gelatin silver print on paper

Provenance
Purchased by the Benton Museum of Art at Pomona College on August 12, 2020 from Edwynn Houk Gallery, New York.
Commentary
His Greatest Role: Captain Clark Gable, one of America's most popular film stars, faces the portable camera of an Allied soldier as he walks to his quarters with some of his fellow officers. As gunner, he went over Europe on many a mission and came back with his plane peppered with flak.

On August 12, 1942, following the death of his wife, actress Carole Lombard, Gable joined the U.S. Army Air Forces. Lombard had suggested that Gable enlist as part of the war effort, but MGM was reluctant to let him go. Commanding General of the U.S. Army Air Forces Henry H. "Hap" Arnold offered Gable a "special assignment" with the First Motion Picture Unit following basic training. Gable spent most of 1943 in England at RAF Polebrook with the 351st Bomb Group, as head of a six-man motion picture unit. Gable flew five combat missions, including one to Germany, as an observer gunner in B-17 Flying Fortresses between May 4 and September 23, 1943. He earned the Air Medal and the Distinguished Flying Cross for his efforts. During one of the missions, Gable's aircraft was damaged by flak and attacked by fighters; flak went through Gable's boot and narrowly missed his head. When word of this reached MGM, studio executives began to badger the Army Air Forces to reassign its most valuable screen actor to noncombat duty. In November 1943, Gable returned to the United States to edit his film. Gable was awarded the following military honors for service: the Distinguished Flying Cross; Air Medal; American Campaign Medal; European-African-Middle Eastern Campaign Medal; and World War II Victory Medal. Adolf Hitler favored Gable above all other actors. During World War II, Hitler offered a sizable reward to anyone who could capture Gable and bring him to him unscathed.
Technique
Ferrotyped prints are processed in such a way that they are shiny. The print has a sensitive surface, usually thinner, because it was put through a press while still wet.
Marks
On recto: Label in bottom right corner, "DISPATCH / PHOTO NEWS / SERVICE / INC. / NEW YORK".

On verso: Typewritten label attached in center, "HIS GREATEST ROLE / Capt. Clark Gamble, one of America's most popular film stars, faces the portable camera / of an Allied soldier as he walks to his quarters with some of his fellow officers. As / gunner he went over Europe on many a mission and came back with his plane peppered with flak. Produced Exclusively by Dispatch Photo News Service, New York City". Handwritten in graphite in top left corner, "DP-WW2-022".
Materials
Ferrotyped prints have a sensitive surface, usually shiny and thinner, because they are put through a press while still wet. Ferrotyping makes the surface of the photograph smoother. Light does not scatter as much on a smoother surface, so this increases contrast. That makes ferrotyped images better for press photography.
Keywords Click a term to view the records with the same keyword
This object has the following keywords:
Clark Gable, Clark Gable, Gunners, Motion Picture Industry, Officers, U.S. Army Air Force, World War II
Additional Images Click an image to view a larger version