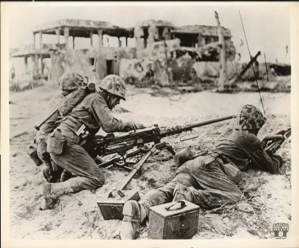 Provenance
Purchased by the Benton Museum of Art at Pomona College on August 12, 2020 from Edwynn Houk Gallery, New York.
Commentary
Kwajalein Action: His inflation belt still around his middle, this gunner sets up his heavy machine gun and prepares for business in the Marine landing on the beach of Namur Island, Kwajalein Atoll.

On January 31, 1944, the 7th Infantry Division--spearheaded by the 111th Infantry Regiment--performed an amphibious assault on Kwajalein. On February 1, 1944, Kwajalein was the target of the most concentrated bombardment of the Pacific War. Thirty-six thousand shells from naval ships and ground artillery on a nearby islet struck Kwajalein. American B-24 Liberator bombers aerially bombarded the island, adding to the destruction. On February 6, 1944, Kwajalein was claimed by the United States and was designated, with the rest of the Marshall Islands, as a United Nations Trust Territory under the United States.
Technique
Ferrotyped prints are processed in such a way that they are shiny. The print has a sensitive surface, usually thinner, because it was put through a press while still wet.
Marks
On recto: Label in bottom right corner, "DISPATCH / PHOTO NEWS / SERVICE / INC. / NEW YORK".

On verso: Typewritten label attached in center: "KWAJALEIN ACTION / His inflation belt still around his middle this gunner sets up his heavy / machine gun and prepares for business in Marine landing on the beach / of Namur Island, Kwajalein Atoll. Produced Exclusively by Dispatch Photo News Service, New York City U.S. Marine Corps Photo". Handwritten in graphite in top left corner, "DP-WW2-072".
Materials
Ferrotyped prints have a sensitive surface, usually shiny and thinner, because they are put through a press while still wet. Ferrotyping makes the surface of the photograph smoother. Light does not scatter as much on a smoother surface, so this increases contrast. That makes ferrotyped images better for press photography.
Keywords Click a term to view the records with the same keyword
This object has the following keywords:
Beach Scenes, Gunners, Japan, Landings, Life jackets, Machine Guns, Marines, Namur Island, Pacific Theater, United States Marine Corps, World War II
Additional Images Click an image to view a larger version