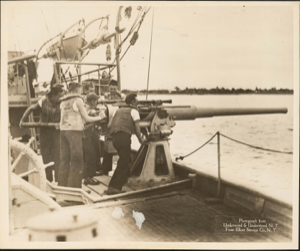 
The intrepid gun crew of the converted yacht Venetia found German submarine U-39, which sank the RMS Lusitania. A well-placed shot from their guns sent the Germans to the bottom., 1917-1918
Vintage ferrotyped gelatin silver print on paper

Provenance
Purchased by the Benton Museum of Art at Pomona College on August 12, 2020 from Edwynn Houk Gallery, New York.
Commentary
They Avenged the Sinking of the Lusitania! The intrepid gun crew of the converted yacht Venetia, as seen back in home waters. These boys have won undying fame. They found a German submarine U-39, which sent the ill-fated Lusitania to the bottom, in the act of sinking a British steamer. A well-placed shot from their guns sent the German pirates to the bottom.

The sinking of the Cunard ocean liner RMS Lusitania occurred on Friday, May 7, 1915 during the First World War. Germany waged submarine warfare against the United Kingdom, which had implemented a naval blockade of Germany. The ship was identified and torpedoed by the German U-boat U-20 and sank in 18 minutes, and also took on a heavy starboard list. The vessel went down 11 miles (18 km) off the Old Head of Kinsale, Ireland, killing 1,198 and leaving 761 survivors. The sinking turned public opinion in many countries against Germany, contributed to the American entry into World War I, and became an iconic symbol in military recruiting campaigns of why the war was being fought.
Marks
On recto: Clear label attached near bottom right corner, "Photograph from / Underwood & Underwood, N. Y. / From Elliott Service Co., N. Y."

On verso: Typewritten label attached in center, "THEY AVENGED THE SINKING OF THE LUSITANIA! / The intrepid gun crew of the converted yacht / 'Venetia' is seen back in home waters. These boys / have won undying fame. They found the Hun sub- / marine U-39, which sent the ill-fated 'Lusitania' to the / bottom, in the act of sinking a British steamer. A well / placed shot from their gun sent the German pirates / to the bottom. / UNDERWOOD & UNDERWOOD NEWS PHOTOGRAPHS ELLIOTT SERVICE CO. EXCLUSIVE DISTRIBUTORS 141-145 West 36th St., NEW YORK Â©1793". Handwritten in graphite in top left corner, "UU-031".
Technique
Ferrotyped prints are processed in such a way that they are shiny. The print has a sensitive surface, usually thinner, because it was put through a press while still wet.
Materials
Ferrotyped prints have a sensitive surface, usually shiny and thinner, because they are put through a press while still wet. Ferrotyping makes the surface of the photograph smoother. Light does not scatter as much on a smoother surface, so this increases contrast. That makes ferrotyped images better for press photography.
Keywords Click a term to view the records with the same keyword
This object has the following keywords:
Gunners, RMS Lusitania, RMS Lusitania, Sinking of the Lusitania, Sinking ships, U-39, United States Navy, United States Navy, USS Venetia, World War I
Additional Images Click an image to view a larger version