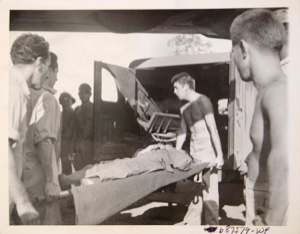 Commentary
Fighterâs Return Somewhere in the Southwest Pacific: This engineer doubled as a waist gunner during a raid on Gasmata. Wounded, he returns to his Southwest Pacific base on a stretcher. He fought aboard one of the five B-24 Liberators that bombed the Japanese-held island of New Britain on May 23rd. After fighting off a squadron of Japanese Zeros, every one of the American bombers came home, June 1943.
Dimensions
Sheet: 7 x 8 7/8
Technique
Ferrotyped prints are processed in such a way that they are shiny. The print has a sensitive surface, usually thinner, because it was put through a press while still wet.
Materials
Ferrotyped prints have a sensitive surface, usually shiny and thinner, because they are put through a press while still wet. Ferrotyping makes the surface of the photograph smoother. Light does not scatter as much on a smoother surface, so this increases contrast. That makes ferrotyped images better for press photography.
Keywords Click a term to view the records with the same keyword
This object has the following keywords:
B-24s, Bombers, Casualties, Engineers, Gasmata, Gunners, Injury, Japan, New Britain, Pacific Theater, Southwest Pacific, Stretchers, United States, World War II
Additional Images Click an image to view a larger version