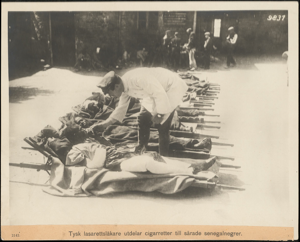 Soon after the war started, soldiers from Nigeria, the Gold Coast, Sierra Leone, Gambia and other African colonies were recruited. They helped to defend the borders of their countries that adjoined German territories. Later, they played an important role in the campaigns to remove the Germans from Africa. Throughout the war, 60,000 Black South African and 120,000 other Africans also served in uniformed Labor Units. In 1915, the British West Indies Regiment (BWIR) was formed as a separate Black unit within the British Army. The first recruits sailed from Jamaica to Britain and arrived in October 1915 to train. The 3rd battalion arrived in early 1916 in Plymouth. Other battalions sailed direct to Egypt, arriving in Alexandria in March 1916. By the warâs end in November 1918, a total of 15,204 black men had served in the BWIR.
Marks
Negative number in plate. Typewritten title in Danish affixed to recto.
Dimensions
Sheet: 9 3/8 x 11 3/4

Image height approximate.
Keywords Click a term to view the records with the same keyword
This object has the following keywords:
Casualties, Germany, Injury, Physicians, Racial Discrimination, Segregation, Senegalese, Senegalese troops, Smoking, Stretchers, World War I
Dimensions
Portfolio List Click a portfolio name to view all the objects in that portfolio
This object is a member of the following portfolios: