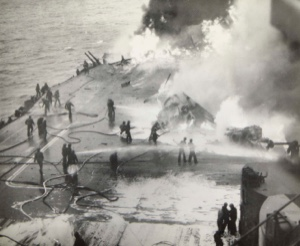 Commentary
Raging inferno on carrierâs deck: Crewmen battle the gasoline-fed flames on the flight deck of the carrier Saratoga, following hits by the Japanese while operating off Iwo Jima, February 21. In the center are the twisted remains of one of the vesselâs planes. Flight operations were resumed after the flames were extinguished. The ship returned to the Puget Sound Navy Yard, Bremerton, Washington, where her damage was repaired.
Dimensions
Sheet: 8 1/8 x 9 7/8
Technique
Ferrotyped prints are processed in such a way that they are shiny. The print has a sensitive surface, usually thinner, because it was put through a press while still wet.
Materials
Ferrotyped prints have a sensitive surface, usually shiny and thinner, because they are put through a press while still wet. Ferrotyping makes the surface of the photograph smoother. Light does not scatter as much on a smoother surface, so this increases contrast. That makes ferrotyped images better for press photography.
Keywords Click a term to view the records with the same keyword
This object has the following keywords:
Aerial bombardments, Firefighters, Fires, Iwo Jima, Japan, Military Aircraft, Pacific Theater, Sailors, United States Navy, United States Navy, USS Saratoga, World War II, Wreckage
Additional Images Click an image to view a larger version