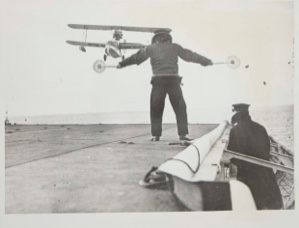 Commentary
How Britainâs aircraft carriers aid war effort: These pictures, taken aboard an aircraft carrier of the British fleet, show how the naval air arm does its share in the British war effort. Here a Walrus seaplane comes in for a landing on the deck of a carrier. A deck officer signals with his bats to tell the pilot to fly higher or lower. In this case, the pilot is being told to come down a bit. The Walrus seaplanes from this carrier patrol the Atlantic shipping lanes. Their bomb racks are loaded with anti-submarine bombs, January 1941.
Dimensions
Sheet: 7 x 8 7/8
Technique
Ferrotyped prints are processed in such a way that they are shiny. The print has a sensitive surface, usually thinner, because it was put through a press while still wet.
Materials
Ferrotyped prints have a sensitive surface, usually shiny and thinner, because they are put through a press while still wet. Ferrotyping makes the surface of the photograph smoother. Light does not scatter as much on a smoother surface, so this increases contrast. That makes ferrotyped images better for press photography.
Keywords Click a term to view the records with the same keyword
This object has the following keywords:
Aircraft carriers, European Theater, Officers, Patrols, Royal Navy, Sailors, Submarines, Walrus seaplanes, World War II
Additional Images Click an image to view a larger version