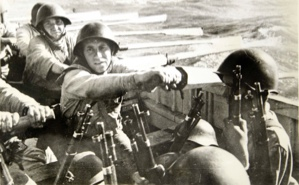 Bearing down on their oars, these men of the Red Baltic Fleet head for shore to participate in an assault operation, February 1943
Vintage ferrotyped gelatin silver print on paper

Commentary
Heading for shore and battle: Bearing down on their oars, these men of the Red Baltic Fleet are heading for shore to participate in an assault operation. Wearing tin hats and armed to the teeth, they are ready to spring into action the moment their boat hits the beach. Latest dispatches received from Moscow indicate that the Russians, advancing south of Rostov, are now only five miles from that key city, February 1943.
Technique
Ferrotyped prints are processed in such a way that they are shiny. The print has a sensitive surface, usually thinner, because it was put through a press while still wet.
Materials
Ferrotyped prints have a sensitive surface, usually shiny and thinner, because they are put through a press while still wet. Ferrotyping makes the surface of the photograph smoother. Light does not scatter as much on a smoother surface, so this increases contrast. That makes ferrotyped images better for press photography.
Keywords Click a term to view the records with the same keyword
This object has the following keywords:
European Theater, Germany, Landing craft, Landings, Rostov, Sailors, Soviet Baltic Fleet, World War II
Additional Images Click an image to view a larger version