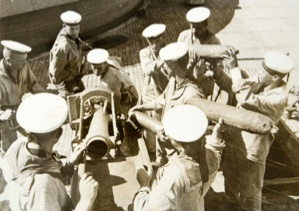 Commentary
Aboard a Soviet battleship: Most frequently mentioned in dispatches about the Black Sea Fleet of the Soviet Red Navy is the Battleship Paris Commune. Laid down June 3, 1909 under the name Sevastopol and launched as part of the Czarist navy on June 16, 1911, the vessel first took part in naval operations on August 14, 1915. She was active during the remainder of World War I. In 1921, she was renamed the Paris Commune. During the past few years she has been modernized and armed with the newest technical equipment. Some of the training and recreational activities of her crew are shown in a series of pictures. Photo shows artillery practice aboard the Paris Commune. Apparently light in weight, the shells appear to be dummies, June 1941.
Technique
Ferrotyped prints are processed in such a way that they are shiny. The print has a sensitive surface, usually thinner, because it was put through a press while still wet.
Materials
Ferrotyped prints have a sensitive surface, usually shiny and thinner, because they are put through a press while still wet. Ferrotyping makes the surface of the photograph smoother. Light does not scatter as much on a smoother surface, so this increases contrast. That makes ferrotyped images better for press photography.
Keywords Click a term to view the records with the same keyword
This object has the following keywords:
Artillery training, European Theater, Germany, Paris Commune, Red Fleet, Sailors, Shells, Soviet Black Sea Fleet, World War II
Additional Images Click an image to view a larger version