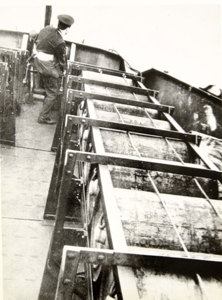 Part of the deck of a Corvette, with depth charges in racks ready for action. These ships are built specially to combat submarines., February 1941
Vintage ferrotyped gelatin silver print on paper

Commentary
Shipyards of the British Empire are building a new type of warship called the âCorvetteâ that may be the answer to Hitlerâs threat of intensified submarine warfare that he announced in his Munich speech February 24th. The photo shows part of the deck of a Corvette, with depth charges in racks ready for action. These ships are built specially to combat submarines. They carry crews of 50 to 60, and although smaller and less speedy than destroyers, are armed with the same anti-submarine weapons, February 1941.
Technique
Ferrotyped prints are processed in such a way that they are shiny. The print has a sensitive surface, usually thinner, because it was put through a press while still wet.
Materials
Ferrotyped prints have a sensitive surface, usually shiny and thinner, because they are put through a press while still wet. Ferrotyping makes the surface of the photograph smoother. Light does not scatter as much on a smoother surface, so this increases contrast. That makes ferrotyped images better for press photography.
Keywords Click a term to view the records with the same keyword
This object has the following keywords:
Corvettes, Depth charges, European Theater, Royal Navy, Sailors, U-boats, World War II
Additional Images Click an image to view a larger version