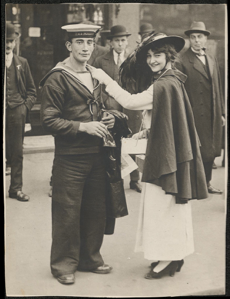 Provenance
Purchased by the Benton Museum of Art at Pomona College on August 12, 2020 from Edwynn Houk Gallery, New York.
Commentary
Italian Flag Day: A Bersaglieri girl sells a flag to a Jack Tar.

The Bersaglieri (singular is Bersagliere) are a specialty of the Italian Army's infantry corps. They were originally created by General Alessandro La Marmora on June 18, 1836 to serve in the Army of the Kingdom of Sardinia. This later became the Royal Italian Army. Jack Tar (also Jacktar, Jack-tar or Tar) is a common English term originally used to refer to seamen of the Merchant or Royal Navy, particularly during the period of the British Empire. By World War I, the term was used as a nickname for those in the U.S. Navy. Members of the public and seafarers alike made use of the name to identify those who went to sea. It was not used as a pejorative, and sailors were happy to use the term to label themselves.
Dimensions
Sheet: 8 3/16 x 6 1/4
Technique
Ferrotyped prints are processed in such a way that they are shiny. The print has a sensitive surface, usually thinner, because it was put through a press while still wet.
Materials
Ferrotyped prints have a sensitive surface, usually shiny and thinner, because they are put through a press while still wet. Ferrotyping makes the surface of the photograph smoother. Light does not scatter as much on a smoother surface, so this increases contrast. That makes ferrotyped images better for press photography.
Keywords Click a term to view the records with the same keyword
This object has the following keywords:
Bersaglieri, Flag Day (Italy), HMS Pembroke, Royal Navy, Sailors, Street Scenes, World War I
Additional Images Click an image to view a larger version