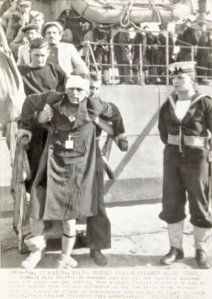 Commentary
Wounded Italian prisoner helped ashore: This wounded Italian prisoner of war is helped ashore from a British destroyer at Valletta after being rescued from sea, following attack on a merchantman running out of Italy to North Africa. His wounded head is wrapped in a bandage, and all his own clothing is missing, save for socks and one garter. Other Italian prisoners fill gangplank, Malta, February 1943.
Dimensions
Sheet: 10 15/16 x 8
Materials
Wire photographs were originally transmitted over phonelines, then later, by satellite. They were first used in the early 1920s. Associated Press became a leader with this. After pigment touch-ups, etc., the print is put into a drum (like a drum scanner). The image gets converted into audio tones that are transmitted. The tones are received and beamed onto photo-sensitive paper. Wire photographs are copies without originals---they are hybrid, transmitted objects. (Britt Salvesen, Curator and Department Head, Photography Department, Los Angeles County Museum of Art, March 30-31, 2022)
Keywords Click a term to view the records with the same keyword
This object has the following keywords:
Casualties, Destroyers, European Theater, Injury, Italy, Merchant vessels, Prisoners of War, Royal Navy, Sailors, Sea Rescues, Search and rescue, Valletta, World War II
Additional Images Click an image to view a larger version