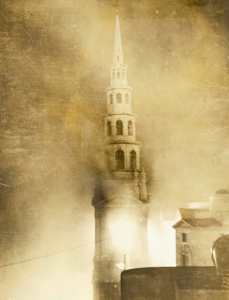 Flames lick around the base of the spire of St. Bride's Church after the roof had collapsed. German planes showered incendiary bombs on London., December 29, 1941
Vintage ferrotyped gelatin silver print on paper

Bibliography
Illustrated: Associated Press ID #4112291119 and 401229078.
Commentary
This is how St. Bride's Church in London appeared during the fire-blitz on December 29, 1941, when air raiders showered incendiary bombs on the British capital. Flames lick around the base of the church's wedding cake spire, after the roof of the church (at left) had collapsed.
Technique
Ferrotyped prints are processed in such a way that they are shiny. The print has a sensitive surface, usually thinner, because it was put through a press while still wet.
Materials
Ferrotyped prints have a sensitive surface, usually shiny and thinner, because they are put through a press while still wet. Ferrotyping makes the surface of the photograph smoother. Light does not scatter as much on a smoother surface, so this increases contrast. That makes ferrotyped images better for press photography.
Keywords Click a term to view the records with the same keyword
This object has the following keywords:
Air raids, European Theater, Fires, Great Britain, Incendiary bombs, London, London Blitz, Luftwaffe, Night, Rubble, Saint Bride's Church, Spires, World War II
Additional Images Click an image to view a larger version

Your current search criteria is: Keyword is "FRG" and [Object]Nationality is ".