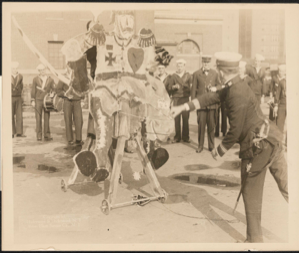 
To prepare for action for the Fourth Liberty Loan, Lt. Commander W. D. Sharp gave orders to have a wooden effigy made of the "All Highest" leader of "Kultur". All bond buyers throw one dart for each bond purchased., October 1918
Vintage ferrotyped gelatin silver print on paper

Provenance
Purchased by the Benton Museum of Art at Pomona College on August 12, 2020 from Edwynn Houk Gallery, New York.
Commentary
Photos of Latest U.S. Army and Navy War News---Third Naval District Starts Bond Drive: Secretary of Navy Josephus Daniels sent a radiogram ordering the decks cleared for action for the Fourth Liberty Loan. Upon receiving it, Lt. Commander W. D. Sharp gave orders to have a wooden effigy made of the "All Highest" leader of "Kultur". All bond buyers throw one dart for each bond purchased. The dart nearest to the center of the heart will win an extra bond for its owner.

To help finance the war effort and build patriotism, the U.S. Treasury issued securities termed âLiberty Bondsâ in June and October 1917 and in May and October 1918. A fifth and final issue, termed the Victory Liberty Loan or Victory Loan, was issued in May 1919 to consolidate short-term debt issued during the war.
Marks
Credited in plate with typeset credit and title on label affixed to verso.
Technique
Ferrotyped prints are processed in such a way that they are shiny. The print has a sensitive surface, usually thinner, because it was put through a press while still wet.
Materials
Ferrotyped prints have a sensitive surface, usually shiny and thinner, because they are put through a press while still wet. Ferrotyping makes the surface of the photograph smoother. Light does not scatter as much on a smoother surface, so this increases contrast. That makes ferrotyped images better for press photography.
Keywords Click a term to view the records with the same keyword
This object has the following keywords:
Darts, Effigies, Josephus Daniels, Liberty Bond drives, Lt. Commander W. D. Sharp, United States, War bonds drives, World War I
Additional Images Click an image to view a larger version

Your current search criteria is: Keyword is "GAT" and [Object]Century is "20th c".