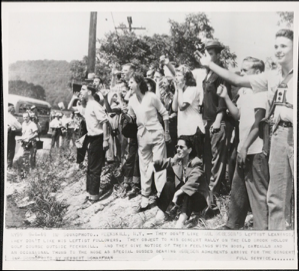 
They don't like Paul Robeson's leftist leanings, and they object to his concert rally on the Old Brook Hollow Golf Course outside Peekskill, New York, September 4, 1949
Vintage sound photograph on paper

Commentary
They don't like Paul Robeson's leftist leanings, they don't like his leftist followers. They object to his concert rally on the Old Brook Hollow Golf Course outside Peekskill, New York. And they give notice of their feelings with boos, catcalls and an occasional thumb to the nose as special busses bearing Robeson adherents arrive for the concert.

Paul Leroy Robeson (1898 â 1976) was an American bass baritone concert artist and stage and film actor. He became famous both for his cultural accomplishments and for his political activism. Educated at Rutgers College and Columbia University, he was also a star athlete in his youth. Robeson studied Swahili and linguistics at the School of Oriental and African Studies, London in 1934. His political activities began with his involvement with unemployed workers and anti-imperialist students he met in Britain. It continued with his support for the Loyalist cause in the Spanish Civil War and his opposition to fascism. In the United States, Robeson also became active in the Civil Rights Movement and other social justice campaigns. His sympathies for the Soviet Union and for communism, and his criticism of the United States government and its foreign policies, caused him to be blacklisted during the McCarthy era.
Marks
On recto: typewritten artist's credit, title and date.
On verso: typewritten title, International News Photos stamp and date stamp.
Materials
Wire photographs were originally transmitted over phonelines, then later, by satellite. They were first used in the early 1920s. Associated Press became a leader with this. After pigment touch-ups, etc., the print is put into a drum (like a drum scanner). The image gets converted into audio tones that are transmitted. The tones are received and beamed onto photo-sensitive paper. Wire photographs are copies without originals---they are hybrid, transmitted objects. (Britt Salvesen, Curator and Department Head, Photography Department, Los Angeles County Museum of Art, March 30-31, 2022)
Keywords Click a term to view the records with the same keyword
This object has the following keywords:
Buses, Civil Rights Movements, Concerts, Injustice, Racial Discrimination
Additional Images Click an image to view a larger version

Your current search criteria is: Keyword is "GLY" and [Object]Display Artist is "Herbert Soharfman".