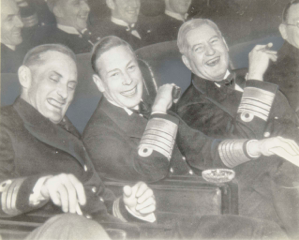 Britain's King George VI, center, with Commander-in-Chief Admiral Sir Bruce Fraser, during a concert in the flagshipâs wardroom, somewhere in England, May 15, 1944
Vintage wire photograph with applied pigment and airbrushing on paper

Bibliography
Illustrated: Associated Press ID #440515186.
Commentary
During his visit to the Home Fleet, Britain's King George VI met crews of Britainâs midget submarines and Human Torpedoes and attended a concert in the flagship's wardroom. The King is all smiles at center. He is with Commander-in-Chief Admiral Sir Bruce Fraser, right, during a concert in the flagshipâs wardroom, somewhere in England, May 15, 1944.
Materials
Wire photographs were originally transmitted over phonelines, then later, by satellite. They were first used in the early 1920s. Associated Press became a leader with this. After pigment touch-ups, etc., the print is put into a drum (like a drum scanner). The image gets converted into audio tones that are transmitted. The tones are received and beamed onto photo-sensitive paper. Wire photographs are copies without originals---they are hybrid, transmitted objects. (Britt Salvesen, Curator and Department Head, Photography Department, Los Angeles County Museum of Art, March 30-31, 2022)
Keywords Click a term to view the records with the same keyword
This object has the following keywords:
Concerts, England, European Theater, Flag ships, Great Britain, King George VI, King George VI, Royal Navy, Sir Bruce Fraser, Sir Bruce Fraser, World War II
Additional Images Click an image to view a larger version

Your current search criteria is: Keyword is "GLY".