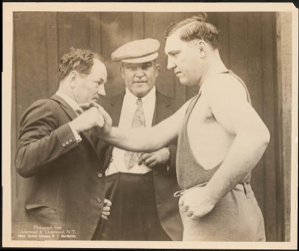 
The mighty Jeffries and Kid McCoy with Heavyweight Champion Jess Willard, who will defend his title against Jack Dempsey in Toledo on July 4th. The picture was taken just before Willard took the train from San Francisco to Toledo., July 1919
Vintage ferrotyped gelatin silver print on paper

Provenance
Purchased by the Benton Museum of Art at Pomona College on August 12, 2020 from Edwynn Houk Gallery, New York.
Commentary
Willard Biggest of Three Champs! The mighty Jeffries and Kid McCoy, two of the best fighting men of their day, with Jess Willard, Heavyweight Champion of the World, who will defend his title against Jack Dempsey in Toledo on July 4th. Willard is one of the best boxers and shiftiest big men in ring history. The picture was taken just before Willard took the train from San Francisco to Toledo, where he is now training.

Jess Myron Willard (1881 â 1968) was an American world heavyweight boxing champion known as the Pottawatomie Giant, who knocked out Jack Johnson in April 1915 for the heavyweight title. He was known for his great strength and size for the time. Today he is also known for his controversial title loss to Jack Dempsey in 1919, in one of the most severe beatings ever in a championship bout. Shortly after the fight, rumors of foul play in Dempsey's corner began to spread. The rumors appeared to be confirmed years later. The January 13, 1964 issue of Sport's Illustrated contained an article titled, "He didn't know the gloves were loaded". In the article, Dempsey's manager, Jack Kearns, confessed to loading Dempsey's gloves with plaster of Paris disguised as talcum powder, without Dempsey's knowledge.
Marks
Credited in plate with typeset credit and title on label affixed to verso.
Technique
Ferrotyped prints are processed in such a way that they are shiny. The print has a sensitive surface, usually thinner, because it was put through a press while still wet.
Materials
Ferrotyped prints have a sensitive surface, usually shiny and thinner, because they are put through a press while still wet. Ferrotyping makes the surface of the photograph smoother. Light does not scatter as much on a smoother surface, so this increases contrast. That makes ferrotyped images better for press photography.
Keywords Click a term to view the records with the same keyword
This object has the following keywords:
James Jeffries, James Jeffries, Jess Willard, Jess Willard, Kid McCoy, Kid McCoy, San Francisco, Toledo, World War I
Additional Images Click an image to view a larger version