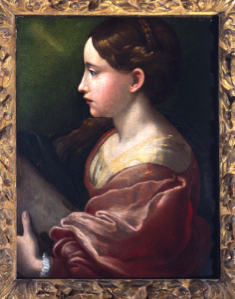 Commentary
This portrait of Saint Barbara shows her in profile, wearing a dark green gown with red trim. The muted grey-green of the background makes it difficult to distinguish Barbara's long brown hair, which flows over her right shoulder. According to her legend, Barbara was the daughter of a pagan nobleman who locked her in a tower to discourage suitors. She converted to Christianity and, in her father's absence, had workmen add a third window to her tower to honor the Holy Trinity. Her father was engaged when he returned and took her to the authorities. Just as she was martyred by her own father, he was struck dead by lightning. This sudden death associated with her own made Barbara the parton saint of miners and gunners. Barbara was very popular in the Middle Ages, but there is now some question about whether she really existed. Many of the accounts of her life are unhistorical, and no less than four cities claim to be the place of her death. In 1969, her feast day, December 4, was suppressed in the Roman calendar.
Materials
Egg tempera
Provenance
Kress Collection (D1754), 1950-1961. Donated by the Kress Foundation to Pomona College in 1961.
Attribution
Longhi considers this an original replica of Parmigianino's 'Saint Barbara' in the Prado, Madrid. Dates the Prado version c. 1522.
Related Objects
P61.1.11 is an original replica by Parmigianino of his Saint Barbara in the Prado Museum of Madrid. The Benton Museum of Art at Pomona College also has a box of xrays of its Kress Collection works.
Bibliography
Michelle DiMarzo, Out of the Kress Vaults: Women in Sacred Renaissance Painting (Fairfield: Fairfield University, 2022), 10 (illustrated/ color).
Sarah Allen and Julia Patzelt, Beyond Appearance: Constructing Likeness (Claremont: Pomona College Museum of Art, 2003), 20 (illustrated/ color).
Mary Vaccaro, Parmigianino: The Paintings - Catalogue raisonnÃ© (Allemandi: Turin and London, 2002).
Keywords Click a term to view the records with the same keyword
This object has the following keywords:
Kress, Saint Barbara
Dimensions
Bibliography List
This object has the following bibliographic references:
Portfolio List Click a portfolio name to view all the objects in that portfolio
This object is a member of the following portfolios:

Your current search criteria is: Keyword is "ICX".