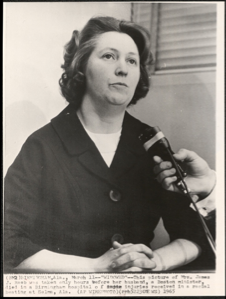 Commentary
"Widowed": this picture of Mrs. James J. Reeb was taken only hours before her husband, a Boston minister, died in a Birmingham hospital of injuries received in a racial beating in Selma, Alabama.

James Reeb (1927-1965) was an American Unitarian Universalist minister, pastor, and activist during the Civil Rights Movement in Washington DC and Boston. While participating in the Selma to Montgomery Marches in Selma, Alabama in 1965, he was murdered by white segregationists. He died of head injuries in the hospital two days after being severely beaten. Reeb's death provoked mourning throughout the country, and tens of thousands held vigils in his honor. President Lyndon B. Johnson called Reeb's widow and father to express his condolences. The President invoked Reeb's memory when he delivered a draft of the Voting Rights Act to Congress on March 15. The same day, Martin Luther King eulogized Reeb at a ceremony at Brown's Chapel in Selma: "James Reeb symbolizes the forces of good will in our nation. He demonstrated the conscience of the nation. He was an attorney for the defense of the innocent in the court of world opinion. He was a witness to the truth that men of different races and classes might live, eat, and work together as brothers."
Marks
On recto: typewritten title and date.
On verso: Associated Press stamp.
Materials
Wire photographs were originally transmitted over phonelines, then later, by satellite. They were first used in the early 1920s. Associated Press became a leader with this. After pigment touch-ups, etc., the print is put into a drum (like a drum scanner). The image gets converted into audio tones that are transmitted. The tones are received and beamed onto photo-sensitive paper. Wire photographs are copies without originals---they are hybrid, transmitted objects. (Britt Salvesen, Curator and Department Head, Photography Department, Los Angeles County Museum of Art, March 30-31, 2022)
Keywords Click a term to view the records with the same keyword
This object has the following keywords:
Activists, Assaults, Birmingham, Boston, Civil Rights Movements, Death, Hate, Hate crimes, Injustice, Loss, Marie Deason Reeb, Mourning, Murder, Racial Discrimination, Reverend James Reeb, Selma, Selma to Montgomery March, Widows
Additional Images Click an image to view a larger version