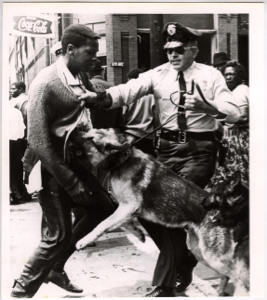 Commentary
A police dog lunges at a black man during racial demonstration in Birmingham, Alabama today. At right, another dog stands ready.

On May 3, 1964, Bill Hudson took this iconic photo of Walter Gadsden, a young black bystander who had been grabbed by a sunglasses-wearing police officer, while a German Shepherd lunged at his chest. The photo appeared above the fold, covering three columns in the next day's issue of The New York Times, as well as in other newspapers nationwide. The only paper to not publish the image was the local Birmingham newspaper. On the afternoon of May 4, 1963, during a meeting at the White House with members of a political group, President Kennedy discussed the photograph stating, âThereâs no federal law we could pass to do anything about that picture in todayâs Times. Well, there isnât. I mean, what law can you pass to do anything about police power in the community of Birmingham? There is nothing we can do.â The powerful image nationalized the black freedom movement and led to the first serious civil rights legislation since Reconstruction, eventually passed as the Civil Rights Act of 1964, abolishing legal segregation. Author Diane McWhorter wrote in her Pulitzer Prize-winning 2001 book Carry Me Home: Birmingham, Alabama, the Climactic Battle of the Civil Rights Revolution that Hudson's photo that day drove "international opinion to the side of the Civil Rights revolution." Despite the imageâs era-defining influence, Bill Hudson did not achieve fame; for years the photoâs credit was generally given to the Associated Press rather than to him personally. He was not even compensated with a bonus afterwards. In 1974, Hudson would leave the Associated Press to work for its competitor, United Press International.
Provenance
Donated to the Benton Museum of Art at Pomona College by Michael Mattis and Judy Hochberg on June 2, 2021.
Bibliography
S. Kasher, The Civil Rights Movement: A Photographic History 1954-68, 89. Associated Press ID # 6305031269; 6305030121; 630503015; 18086656878162.
Marks
On verso: Lengthy "WIDE WORLD PHOTOS" copywrite stamped upside down in black ink near center. Handwritten in graphite in top left corner "CVL-AL-064.21BH 10,000". Handwritten along left side near top left corner: "1905". Handwritten in graphite near top right corner: "1963 / SELMA AL / BULL CONNOR".
Dimensions
Sheet: 8 7/16 x 7 9/16
Keywords Click a term to view the records with the same keyword
This object has the following keywords:
Birmingham, Civil Rights Act of 1964, Civil Rights Movements, Demonstrations, Discrimination, Injustice, Police Brutality, Police dogs, Street Scenes, Walter Gadsden
Additional Images Click an image to view a larger version