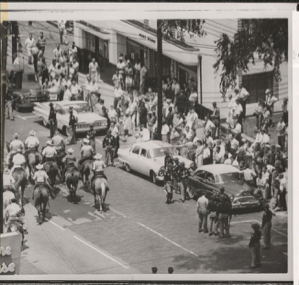 Commentary
Sheriff's Posse on the Scene: A dozen members of the sheriff's mounted posse patrol near the front of the bus station in Montgomery, Alabama today after a mob beat a group of Freedom Riders from Birmingham.

Freedom Riders were Civil Rights activists who rode interstate buses into the segregated South starting in 1961 to challenge the non-enforcement of the United States Supreme Court decisions Morgan v. Virginia (1946) and Boynton v. Virginia (1960), which ruled that segregated public buses were unconstitutional. The Southern states had ignored the rulings, and the federal government did nothing to enforce them. The Freedom Riders challenged this status quo by riding interstate buses in the South in mixed racial groups to challenge local laws or customs that enforced segregation in seating. The Freedom Rides, and the violent reactions they provoked, bolstered the credibility of the American Civil Rights Movement. They called national attention to the disregard for federal law and the local violence used to enforce segregation in the Southern United States. Police arrested riders for trespassing, unlawful assembly, violating state and local Jim Crow laws, and other alleged offenses---but often they let white mobs attack them first without intervening.

On May 14, Mother's Day, in Anniston, Alabama, a mob of Klansmen, some still in church attire, attacked the first of the two buses (the Greyhound). The driver tried to leave the station, but was blocked until KKK members slashed its tires. The mob forced the crippled bus to stop several miles outside of town and then threw a firebomb into it. As the bus burned, the mob held the doors shut, intending to burn the riders to death. Sources disagree, but either an exploding fuel tank or an undercover state investigator brandishing a revolver caused the mob to retreat, and the riders escaped the bus. The mob beat the riders after they got out. Only warning shots fired into the air by highway patrolmen prevented the riders from being lynched. The roadside site in Anniston and the downtown Greyhound station were preserved as part of the Freedom Riders National Monument in 2017. Some injured riders were taken to Anniston Memorial Hospital. That night, the hospitalized Freedom Riders, most of whom had been refused care, were removed from the hospital at 2 AM, because the staff feared the mob outside the hospital. The local Civil Rights leader Rev. Fred Shuttlesworth organized several cars of black citizens to rescue the injured Freedom Riders in defiance of the white supremacists. The black people were under the leadership of Colonel Stone Johnson and were openly armed as they arrived at the hospital, protecting the Freedom Riders from the mob. When the Trailways bus reached Anniston and pulled in at the terminal an hour after the Greyhound bus was burned, it was boarded by eight Klansmen. They beat the Freedom Riders and left them semi-conscious in the back of the bus.
Marks
On verso: typewritten label with title and date affixed.
Materials
Wire photographs were originally transmitted over phonelines, then later, by satellite. They were first used in the early 1920s. Associated Press became a leader with this. After pigment touch-ups, etc., the print is put into a drum (like a drum scanner). The image gets converted into audio tones that are transmitted. The tones are received and beamed onto photo-sensitive paper. Wire photographs are copies without originals---they are hybrid, transmitted objects. (Britt Salvesen, Curator and Department Head, Photography Department, Los Angeles County Museum of Art, March 30-31, 2022)
Keywords Click a term to view the records with the same keyword
This object has the following keywords:
Birmingham, Bus Stations, Civil Rights Movements, Freedom Riders, Injustice, Montgomery, Mounted police, Racial Discrimination, Street Scenes
Additional Images Click an image to view a larger version