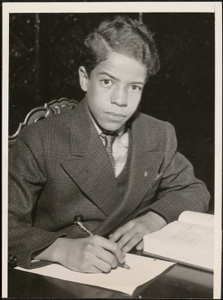 Commentary
Attends University at 13: J. Ernest Wilkins, 13-year-old Chicago black boy and son of a lawyer, is the youngest student at the University of Chicago. He is attending under a scholarship won in city-wide competition.

Jesse Ernest Wilkins, Jr. (1923-2011) was an black nuclear scientist, mechanical engineer and mathematician. He attended the University of Chicago at the age of 13, becoming its youngest student ever. His intelligence led to him being referred to as a "black genius" in the media. As part of a widely-varied and notable career, Wilkins contributed to the Manhattan Project during the Second World War.
Marks
On verso: ACME stamp, date stamp and typewritten label with title and date affixed.
Materials
Ferrotyped prints have a sensitive surface, usually shiny and thinner, because they are put through a press while still wet. Ferrotyping makes the surface of the photograph smoother. Light does not scatter as much on a smoother surface, so this increases contrast. That makes ferrotyped images better for press photography.
Keywords Click a term to view the records with the same keyword
This object has the following keywords:
Civil Rights Movements, Injustice, Jesse Ernest Wilkins, Jr., Jesse Ernest Wilkins, Jr., Racial Discrimination, Scientists, University of Chicago
Additional Images Click an image to view a larger version

Your current search criteria is: Keyword is "IJM".