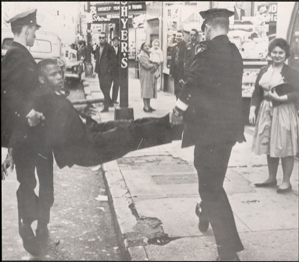 Fisk University student John Robert Lewis, 22, is on the way to a paddy wagon after his arrest at a sit-in attempt at a downtown Nashville restaurant, December 1962
Vintage wire photograph on paper

Commentary
Fisk University student John Robert Lewis, 22, is on the way to a paddy wagon after his arrest at a sit-in attempt at a downtown Nashville restaurant. Officers charged Lewis and two other college students with failing to obey police orders when they refused to leave the restaurant. The three later posted $5 bonds and were scheduled to appear later today in city court.

John Lewis (1940-2020) was an American politician and Civil Rights leader. As chairman of the Student Nonviolent Coordinating Committee (SNCC), he was one of the "Big Six" leaders of groups who organized the 1963 March on Washington. He played many key roles in the Civil Rights Movement and its actions to end legalized racial segregation in the United States. He was a member of the Democratic Party leadership in the U.S. House of Representatives and served as a Chief Deputy Whip starting in 1991 and Senior Chief Deputy Whip starting in 2003.

The Selma to Montgomery Marches were three protest marches held in 1965 along the 54-mile (87 km) highway from Selma, Alabama to the state capital of Montgomery. The marches were organized by nonviolent activists to demonstrate the desire of black citizens to exercise their constitutional right to vote, in defiance of segregationist repression. They were part of a broader voting rights movement underway in Selma and throughout the American South. By highlighting racial injustice, the marches contributed to passage that year of the Voting Rights Act, a landmark federal achievement of the Civil Rights Movement.
Marks
On verso: date stamp and newspaper caption with manuscript title and date stamp affixed.
Materials
Wire photographs were originally transmitted over phonelines, then later, by satellite. They were first used in the early 1920s. Associated Press became a leader with this. After pigment touch-ups, etc., the print is put into a drum (like a drum scanner). The image gets converted into audio tones that are transmitted. The tones are received and beamed onto photo-sensitive paper. Wire photographs are copies without originals---they are hybrid, transmitted objects. (Britt Salvesen, Curator and Department Head, Photography Department, Los Angeles County Museum of Art, March 30-31, 2022)
Keywords Click a term to view the records with the same keyword
This object has the following keywords:
Arrest, Civil Rights Movements, Injustice, John Lewis, John Lewis, Male Portraits, Nashville, Police, Racial Discrimination, Restaurants, Risk University, Sit-ins, Street Scenes, Students
Additional Images Click an image to view a larger version

Your current search criteria is: Keyword is "IMW".