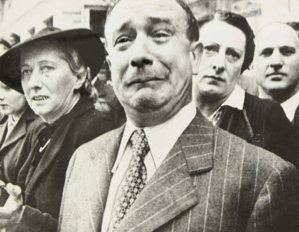 Commentary
The Instant Happened: Tears on the streets of Marseilles. Elsewhere brave words. But how much real hope? Roosevelt said, âDemocracy is not dying, dictatorship is not the wave of the future," in his third inaugural address. But what hope remains? It is February 19, 1941, and Hitler holds the Atlantic coast of Europe. In Marseilles, the flags of defeated French regiments, stranded in unoccupied France since the black armistice with Hitler, are now being carried down to the docks to be sent to Algeria for safe keeping. How long will they be safe there? How long will Frenchmen be safe in Marseilles? They weep, February 19, 1941. NB: Frenchman crying as the flags of fallen France were marched through the streets of Marseilles on their way to Africa. The manâs face conveys a sense of grief so profound as to exceeed our expectations. The photo is nicknamed âThe weeping Frenchmanâ or âThe Crying Frenchmanâ. The French regimental flags were moved into the South of France in order to preserve them from the surrender. The glory of France was ground underfoot by German armies. In six weeks, the vaunted French Army, the Maginot Line, and all of Franceâs pride were destroyed by the German blitzkreig. The French collapse was as sudden as it was unexpected. A stunning defeat â particularly since before the war, the French Army was considered the most powerful in Europe. The book âMarseille sous lâoccupationâ by Lucien Gaillard says that the man in photo is Monsieur JerÃ´me Barzetti, and the picture was taken in Marseilles in September, 1940. The photo first appeared in print in Life Magazine in their March 3, 1941 issue. The magazine caption identifies it as âa Frenchman sheds tears of patriotic grief as the flags of his countryâs last regiments are exiled to Africaâ. On this video footage (https://www.youtube.com/watch?v=2IaeXj3eE_I) we can see the crying Frenchman as the French troops march on their way out of France (00:26). Judging by the footage, this picture was not taken in Paris (as has been claimed).
Bibliography
Illustrated: Life Magazine March 3, 1941, pg. 29.
Dimensions
Sheet: 8 1/8 x 10 1/16
Technique
Ferrotyped prints are processed in such a way that they are shiny. The print has a sensitive surface, usually thinner, because it was put through a press while still wet.
Materials
Ferrotyped prints have a sensitive surface, usually shiny and thinner, because they are put through a press while still wet. Ferrotyping makes the surface of the photograph smoother. Light does not scatter as much on a smoother surface, so this increases contrast. That makes ferrotyped images better for press photography.
Keywords Click a term to view the records with the same keyword
This object has the following keywords:
Algeria, Crowds, Crying, Fall of France, Flags, Free France, French, Germany, Jerome Barzetti, Loss, Marseilles, Mourning, Patriotism, Street Scenes, World War II
Additional Images Click an image to view a larger version

Your current search criteria is: Keyword is "IOW".