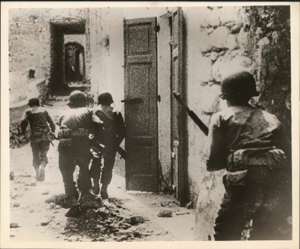 Door-to-door fighting in an unnamed town between German snipers and four U.S. infantrymen out on patrol, 1943-1945
Vintage ferrotyped gelatin silver print on paper

Provenance
Purchased by the Benton Museum of Art at Pomona College on August 12, 2020 from Edwynn Houk Gallery, New York.
Commentary
Fighting in Italy: Photo from Signal Corps shows how door-to-door fighting took place in an unnamed town between German snipers and four U.S. infantrymen out on patrol. In this photo, the four men with rifles ready stalk down a seemingly-deserted, narrow thoroughfare. Death lies ahead of them and they are ready for it.
Technique
Ferrotyped prints are processed in such a way that they are shiny. The print has a sensitive surface, usually thinner, because it was put through a press while still wet.
Materials
Ferrotyped prints have a sensitive surface, usually shiny and thinner, because they are put through a press while still wet. Ferrotyping makes the surface of the photograph smoother. Light does not scatter as much on a smoother surface, so this increases contrast. That makes ferrotyped images better for press photography.
Keywords Click a term to view the records with the same keyword
This object has the following keywords:
European Theater, Germany, Italy, Patrols, Snipers, Soldiers, Street Scenes, U.S. Infantry, World War II
Portfolio List Click a portfolio name to view all the objects in that portfolio
This object is a member of the following portfolios: