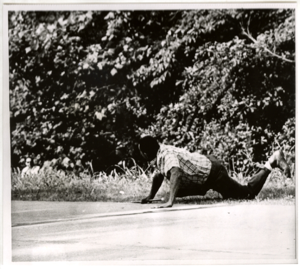 Commentary
James Meredith looks at his would-be assassin, at extreme lower left in bushes, after being shot down on a road near Hernando, Mississippi. Meredith, a civil rights activist, was leading a March Against Fear to encourage blacks to exercise their voting rights.

Jack Thornell was awarded the 1967 Pulitzer Prize for photography for this icon of Civil Rights photojournalism.

James Howard Meredith (born June 25, 1933) is a trailblazer in the Civil Rights movement. In 1962, he became the first black American student admitted to the University of Mississippi, following an intense legal battle in the federal courts. In 1966, Meredith planned a solo 220-mile March Against Fear from Memphis, Tennessee, to Jackson, Mississippi to highlight continuing racism in the South and to encourage voter registration after passage of the Voting Rights Act. On the second day, he was shot by Aubrey James Norvell, a white man, and suffered numerous wounds. Leaders of major organizations vowed to complete the march in his name after he was taken to the hospital. During his recovery, more people from across the country became involved as marchers. Meredith rejoined the march, and when he and other leaders entered Jackson on June 26, they were leading an estimated 15,000 marchers in what was the largest civil rights march in Mississippi.
Provenance
Donated to the Benton Museum of Art at Pomona College by Michael Mattis and Judy Hochberg on June 2, 2021.
Bibliography
Associated Press # 660606036, 26796995952.
Marks
On verso: Handwritten in graphite in top left corner, "CVL-JT-003 4000-". Printed upside down in blue ink near right edge: "DFPD 57551". Stamped in black ink near top right corner: "MAY". An Associated Press stamp in black ink is cut off at right edge where photo was cropped.
Related Objects
Photograph P2021.9.29 is visible in two other photographs in this collection. It is on the front page of a newspaper visible in P2021.9.49, and it is a two-page spread in a magazine visible in P2021.9.52. Additionally, P2021.9.53 is an image of James Meredith getting his wounds bandaged.
Dimensions
Sheet: 5 15/16 x 6 5/8
Materials
Wire photographs were originally transmitted over phonelines, then later, by satellite. They were first used in the early 1920s. Associated Press became a leader with this. After pigment touch-ups, etc., the print is put into a drum (like a drum scanner). The image gets converted into audio tones that are transmitted. The tones are received and beamed onto photo-sensitive paper. Wire photographs are copies without originals---they are hybrid, transmitted objects. (Britt Salvesen, Curator and Department Head, Photography Department, Los Angeles County Museum of Art, March 30-31, 2022)
Keywords Click a term to view the records with the same keyword
This object has the following keywords:
Attempted murder, Aubrey James Norvell, Broken barriers, Civil Rights Movements, Discrimination, Hate, Hate crimes, Hernando, Injuries, Injustice, James Meredith, James Meredith, March Against Fear, Pulitzer Prize, Roads, Shootings, Snipers, Students
Additional Images Click an image to view a larger version