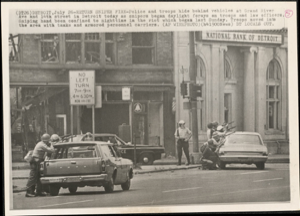 Commentary
Return Sniper Fire: Police and troops hid behind vehicles at Grand River Avenue and 14th Street in Detroit today as snipers began daylight forays on troops and law officers. Sniping had been confined to nighttime in this riot, which began last Sunday. Troops moved into the area with tanks and armored personnel carriers.

The 1967 Detroit Riot, also known as the 1967 Detroit Rebellion or 12th Street Riot, was the bloodiest race riot in the "Long, hot summer of 1967." Comprised mostly of confrontations between black people and police, the riot began in the early morning hours of Sunday July 23, 1967. It began after a police raid of an unlicensed, after-hours bar on the city's Near West Side. It exploded into one of the deadliest and most destructive riots in American history, lasting five days and surpassing the violence and property destruction of Detroit's 1943 race riot. The scale of the riot was the worst in the United States since the 1863 New York City draft riots during the American Civil War. It was not surpassed until the 1992 Los Angeles Riots. The 1967 Detroit Riot was prominently featured in the news media, with live television coverage, extensive newspaper reporting, and stories in Time and Life magazines. The staff of the Detroit Free Press won the 1968 Pulitzer Prize for general local reporting for their coverage.
Marks
On recto: typewritten title and date.
On verso: manuscript title, date and newspaper stamp.
Materials
Wire photographs were originally transmitted over phonelines, then later, by satellite. They were first used in the early 1920s. Associated Press became a leader with this. After pigment touch-ups, etc., the print is put into a drum (like a drum scanner). The image gets converted into audio tones that are transmitted. The tones are received and beamed onto photo-sensitive paper. Wire photographs are copies without originals---they are hybrid, transmitted objects. (Britt Salvesen, Curator and Department Head, Photography Department, Los Angeles County Museum of Art, March 30-31, 2022)
Keywords Click a term to view the records with the same keyword
This object has the following keywords:
14th St., 1967 Detroit Riot, Civil Rights Movements, Grand River Ave., Injustice, Police, Racial Discrimination, Rifles, Rubble, Shootings, Snipers, Street Scenes
Additional Images Click an image to view a larger version