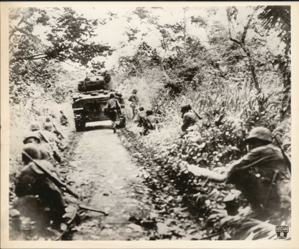 
U.S. Marines keep to the foliage along the roadway as they follow one of their tanks toward the Japanese-held Cape Gloucester airfield on New Britain Island, December 26, 1943 - January 16, 1944
Vintage ferrotyped gelatin silver print on paper

Provenance
Purchased by the Benton Museum of Art at Pomona College on August 12, 2020 from Edwynn Houk Gallery, New York.
Commentary
As Gallant Marines Moved Up On Japanese-held Air Field: Taking precautions against being hit by Japanese snipers, U.S. Marines keep to the dense foliage along the roadway. They follow one of their heavy tanks toward the vital Cape Gloucester airfield, a Japanese-held position on New Britain. This advance followed a heavy bombardment of the area by U.S. Naval forces lying off shore.

The Battle of Cape Gloucester was fought in the Pacific Theater of World War II between Japanese and Allied forces on the island of New Britain, Territory of New Guinea, from December 26, 1943 - January 16, 1944. Codenamed Operation Backhander, the U.S. landing formed part of the wider Operation Cartwheel, the main Allied strategy in the South West Pacific Area and Pacific Ocean Areas. It was the second landing the U.S. 1st Marine Division had conducted during the war thus far, after Guadalcanal. The objective of the operation was to capture the two Japanese airfields near Cape Gloucester. Fighting continued into early January 1944 as the U.S. troops extended their perimeter south from the airfields towards Borgen Bay. Organized resistance ceased on January 16, 1944, when U.S. troops captured Hill 660.
Technique
Ferrotyped prints are processed in such a way that they are shiny. The print has a sensitive surface, usually thinner, because it was put through a press while still wet.
Marks
On recto: Label in bottom right corner, "DISPATCH / PHOTO NEWS / SERVICE / INC. / NEW YORK".

On verso: Typewritten label attached in center, "AS GALLANT MARINES MOVED UP ON JAP-HELD AIR FIELD / Taking precautions against being hit by Jap snipers, U.S. Marines keep to the dense / foliage along the roadway as they follow one of their heavy tanks toward the vital Cape / Gloucester air field, Jap-held position on New Britain. This advance followed a heavy / bombardment of the area by U.S. Naval forces ling off shore. Produced Exclusively by Dispatch Photo News Service, New York City". Handwritten in graphite in top left corner, "DP-WW2-065".
Materials
Ferrotyped prints have a sensitive surface, usually shiny and thinner, because they are put through a press while still wet. Ferrotyping makes the surface of the photograph smoother. Light does not scatter as much on a smoother surface, so this increases contrast. That makes ferrotyped images better for press photography.
Keywords Click a term to view the records with the same keyword
This object has the following keywords:
Battle of Cape Gloucester, Cape Gloucester Airfield, Japan, Marines, Roads, Snipers, Tanks, United States Marine Corps, World War II
Additional Images Click an image to view a larger version