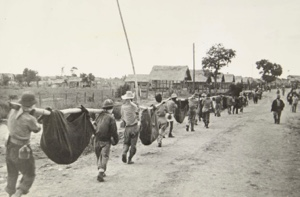 Bibliography
Illustrated: Associated Press ID # 19115557655850.
Commentary
Bataan Death March: Nearing the end of a grim journey, a thinning file of prisoners approaches Camp O'Donnell, the Japanese prisoner of war camp in Capas, Tarlac province, Philippines. They carry the additional burden of their comrades, who dropped along the route from Corregidor, about 70 miles on foot, April 1942.
Dimensions
Sheet: 7 x 8 7/8
Technique
Ferrotyped prints are processed in such a way that they are shiny. The print has a sensitive surface, usually thinner, because it was put through a press while still wet.
Materials
Ferrotyped prints have a sensitive surface, usually shiny and thinner, because they are put through a press while still wet. Ferrotyping makes the surface of the photograph smoother. Light does not scatter as much on a smoother surface, so this increases contrast. That makes ferrotyped images better for press photography.
Keywords Click a term to view the records with the same keyword
This object has the following keywords:
Atrocities, Bataan Death March, Bataan Peninsula, Camp O'Donnell, Capas, Casualties, Corpses, Corregidor Island, Death, Japan, Pacific Theater, Philippines, Prisoners of War, Roads, Stretchers, Suffering, Survival, United States, World War II
Additional Images Click an image to view a larger version

Your current search criteria is: Keyword is "KQN".