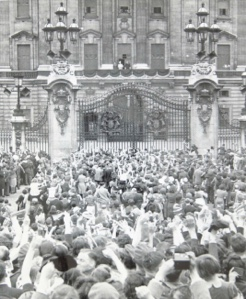 A crown in front of Buckingham Palace cheers the Royal Family on the balcony on VE Day, shortly after the official announcement of German surrender, May 8, 1945
Vintage ferrotyped gelatin silver print on paper
8 5/16 x 6 3/4 in. (21.11 x 17.15 cm)

Commentary
Cheers for the King and Queen: A section of the large crown assembled in front of Buckingham Palace cheer the Royal Family on the balcony on VE Day, May 8, shortly after the official announcement of German surrender. Left to right: Princess Elizabeth, the Queen, the King and Princess Margaret Rose, 1945.
Dimensions
Sheet: 9 x 7 1/8
Technique
Ferrotyped prints are processed in such a way that they are shiny. The print has a sensitive surface, usually thinner, because it was put through a press while still wet.
Materials
Ferrotyped prints have a sensitive surface, usually shiny and thinner, because they are put through a press while still wet. Ferrotyping makes the surface of the photograph smoother. Light does not scatter as much on a smoother surface, so this increases contrast. That makes ferrotyped images better for press photography.
Keywords Click a term to view the records with the same keyword
This object has the following keywords:
British royal family, Buckingham Palace, Celebrations, Crowds, European Theater, Great Britain, King George VI, King George VI, Nazi surrender, Parent and Child, Princess Margaret, Princess Margaret, Queen Elizabeth, Queen Elizabeth, Queen Elizabeth II, Queen Elizabeth II, Street Scenes, Surrenders, Victory in Europe, World War II
Additional Images Click an image to view a larger version

Your current search criteria is: Keyword is "LYB".