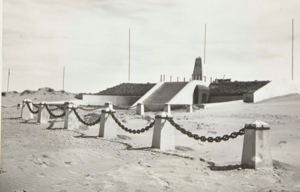 Commentary
A sinister calm shrouds the beaches of Normandy. Wild birds shriek and caw over the still-mined cliffs. But occasionally, little knots of people, including Americans and English, come to pay tribute to 30,192 dead Americans who are buried in the nine cemeteries near the beaches and hedgerows where they fell. One cemeteryâBlosvilleâis still open to receive one or two bodies a week, found by farmers and special teams searching in the remote corners of Normandy. The crowds will be greatest on June 6, and the calm of the beaches will be shattered briefly, for the observance of the second anniversary of D-Day. There will be parades and color and speeches. The Norman citizens will stop their work for the occasion, and then the quiet will return. In memoriam, on the desolate sand of bloody Utah Beach, the 1st Engineer Special Brigade erected this monument to its fallen. The monument is placed on top of a burned-out German pillbox, May 28, 1946.
Dimensions
Sheet: 6 1/4 x 9
Technique
Ferrotyped prints are processed in such a way that they are shiny. The print has a sensitive surface, usually thinner, because it was put through a press while still wet.
Materials
Ferrotyped prints have a sensitive surface, usually shiny and thinner, because they are put through a press while still wet. Ferrotyping makes the surface of the photograph smoother. Light does not scatter as much on a smoother surface, so this increases contrast. That makes ferrotyped images better for press photography.
Keywords Click a term to view the records with the same keyword
This object has the following keywords:
Anniversaries, Beach Scenes, Blosville Cemetery, D-Day memorials, Death, European Theater, Germany, Invasion of Normandy, Invasions, Killed in action, Landings, Mourning, Normandy, Pillboxes, U.S. First Engineer Special Brigade, World War II
Additional Images Click an image to view a larger version